Cape May Jazz Vespers presents a concert featuring sax master Michael Pedicin Jr. Known for his adventurous and soulful playing, Pedicin can blow steamy hot and chillin’ cool. The show will be held at the First Presbyterian Church of Cape May on September 2nd at 8 pm.
For more information and directions visit www.capemayjazzvespers.com or call 609.846.3979.
A $10 minimum donation is requested; limited free parking; wheelchair accessible.

Michael Pedicin Jr. and his quartet of highly acclaimed jazz musicians will play a number of tunes from Michael’s favorite saxophonists, including John Coltrane and Michael Brecker. A few originals will likely be played as well. “I lived my life admiring and idolizing 'Trane, every day, all day,” Pedicin says. “I identify with everything about him. My two deepest attachments on the tenor saxophone are to Coltrane and Mike Brecker. I shook Coltrane’s hand as a kid. And I was a few years older than Mike when I was coming up in Philly, and we remained dear friends till his passing.” 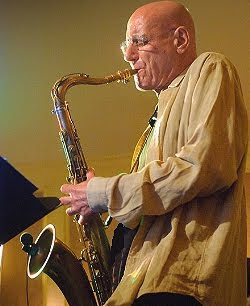 Born on July 29, 1947 in Bryn Mawr, Pennsylvania, Michael Pedicin (Jr.) came up on the Philadelphia jazz scene in the early 1960s. The son of popular Philly saxophonist/bandleader Mike Pedicin, Sr. (who scored an early rock ’n’ roll hit in 1957 with a cover of Joe Morris’ “Shake a Hand”), he was immersed in music from birth, though he quickly staked out a different path from his father. Rather than discouraging his son, Pedicin’s père made sure Michael had the best teachers, eventually bringing him to Buddy Savitt, a bebop-steeped tenor saxophonist who had replaced Stan Getz in Woody Herman’s Second Herd.

“Buddy was a tremendous player who introduced me to the world of improvisation,” Pedicin says, noting that he started on alto. I knew I wanted to go and study, and I started to investigate Cannonball and then Coltrane, who made me want to play the tenor.”

Widely hailed around Philly as a rising young player, Pedicin briefly studied music theory with legendary teacher Dennis Sandole, whose previous students included Coltrane, James Moody, Jim Hall, and Pat Martino (with whom Pedicin toured internationally from 2003-06). While accepted to Juilliard, he decided to stay in Philly and graduated as a composition major from the University of the Arts.

By the early 1970s he was a fixture in Gamble and Huff’s Philadelphia International Records, contributing alto, tenor, and soprano sax work on hundreds of sessions with the likes of Lou Rawls, the Spinners, the O’Jays, David Bowie, and the house MSFB Orchestra. At the same time, he played regularly in local jazz clubs, but after several years as a first-call studio player, Pedicin was itching to flex his jazz chops.

At the recommendation of Peter Erskine, he got the call from Maynard Ferguson, who gave Pedicin his first extensive experience out on the road. While the saxophonist considered Ferguson “a fantastic bandleader and mentor,” his distaste for touring brought him back home, and he re-immersed himself in the studio scene. Also drawn to the healing arts, he started to attend medical school several times, only to quickly be drawn back to music.

He released his debut as a leader in 1980, Michael Pedicin Jr. (Philadelphia International), which despite only minimal promotion delivered a radio hit in New York City with “You.” He spent much of the 1980s working in Atlantic City hotels and casinos, contracting bands and accompanying stars like Frank Sinatra and Tony Bennett. At the same time, he was teaching at Temple University, and put in a two-year run with Dave Brubeck. All the while his interest in medicine never completely waned and he made a final run at med school in 1990. Eventually, he earned a Ph.D in psychology, which led to a small practice specializing in helping creative people. He’s also maintained a hand in education, serving since 2008 as Professor of Music and Coordinator of Jazz Studies at the Richard Stockton College of New Jersey.

A passionately soulful improviser, Pedicin has released a series of scintillating sessions in recent years, building on his reputation as being a top-tier post-bopper distinguished by soulful playing with poise and maturity.

Bassist ANDY LALASIS is the ultimate supporting musician. For years he has been one of the finest bassists in the area. His lyricism and passion are legendary. For over 10 years, Lalasis was the bassist who accompanied all the visiting headliners at the legendary Elaine’s lounge, within Atlantic City’s fondly-remembered Steve Wynn's Golden Nugget Hotel and Casino. Those headliners included everyone from Ann Hampton Calloway, Keely Smith, Joanie Sommers, Billy Eckstine and Billy Daniels. Stars booked at Elaines often stayed in town another week just to record with Lalasis and the legendary house trio. And a frequent visitor to Elaines on his off nights? The one and only Francis Albert Sinatra! Andy spent 11 years at Resorts Casino as a member of Merv Griffin's Coconut Ballroom Orchestra doing Merv's NY's Eve TV shows and playing for the biggest stars who appeared there. Lalasis has also toured the world with Jazz guitar genius Pat Martino and has backed up virtually every “Star Act” who ever performed in Atlantic City at one time or another.

CHRIS SIMONINI is a young keyboard player who is rapidly making a name for himself up and down the East Coast. A music graduate of Rowan University, Chris plays with others of his generation, such as Brian Betz and Behn Gillece, and is increasingly getting calls from veteran players such as Michael Pedicin. His styles range from straight ahead jazz to contemporary jazz sound designs.

“I always look forward to my Vespers shows. For this year’s concert, we’ve picked out some wonderful tunes that I think the audience will enjoy. It’s a great way to end the summer.”
Posted by Dan Cirucci at 8:17 PM