Why He's Hiding From His Own Home Base! 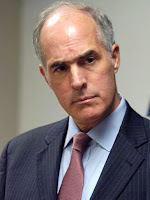 Tuesday, Sen. Bob Casey announced he has only agreed to debates in the Philadelphia and Pittsburgh media markets, declining to debate Lou Barletta in the Harrisburg media market and their mutually-shared home region of Scranton/Wilkes-Barre.
In response, Republican Party of Pennsylvania Communications Director Jason Gottesman, made the following statement:
“Given his penchant for obstruction, resistance, and supporting far-left policies like sanctuary cities, it

is not surprising that Bob Casey is trying to hide from the voters of Pennsylvania in the hope that they will confuse him with the moderate he first claimed to be.
“The fact that Bob Casey is hiding from a debate in his hometown market of Scranton/Wilkes-Barre is even more telling since he has turned his back on the region’s values and people by voting in lock-step with the liberal-progressive leaders in Washington. Why is Casey afraid to face his friends and neighbors?”
Posted by Dan Cirucci at 5:17 PM

Bob Casey hasn't done anything since being elected in 2006. except sleep and yawn. A total waste like his fellow Dems Pelosi Schumer Waters Johnson. Impeach Casey he wouldn't realive it until he passed away.