Is It Really Time For This Guy To Go?

Is it time for Attorney General Jeff Sessions to go?
Is this what we've come to?
After all the rhetoric and rancor, do we actually want him gone? And when and how should that happen?
Well, the answer to the first question is YES, it's time for Sessions to go. And, on the second question we can only say that he should resign and he should do so as soon as it makes practical sense.
He needs to step down.
The simple truth is that Sessions appears to have been a bad choice right from the start. Whoever suggested his name to President Trump in the first place should also be dismissed (if he or she hasn't departed already).
Sessions simply never seemed to have the gravitas for the job. He didn't bring the necessary presence, the necessary bearing, the necessary authority to the role. From the get-go it looked like he was in way over his head, both literally and figuratively.
He hasn't been strong enough, tough enough or credible enough.
In fact, from all appearances, he's permitted himself to be cowered.
Don't you remember? He sort of groveled his way through his Senate confirmation hearings. That was the first bad sign. But, what did you expect? He was way, way too tied to the Senate and, it would seem, to the Inside-the-Beltway crowd. And then he got snagged on that ever-so-brief meeting or brief greeting or whatever he had with a Russian official at the 2016 Republican National Convention. That launched a whole series of  supposed "revelations". 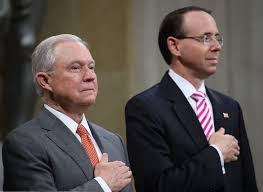 In response, Sessions didn't even put up much of a fight when Democrats used all this to help launch the Russia hysteria. He simply folded, acceded to demands for an interminable investigation and ran for cover.
Yes, he tapped off the stage and abrogated his responsibility. And, according to President Trump he did all this without telling his boss beforehand.
Sessions apparently wanted to have it both ways. He wanted to continue to be the attorney general but he didn't want to catch any of the heat from the vile and unlimited probe that was in the offing. He recused himself from the investigation on March 2, 2017 and in May the special counsel was appointed.
Instead of recusing himself, Sessions should have simply resigned.
But he was too much of an insider, too much of a game-player, too much of a Beltway beneficiary to walk away. He had to play it coy because that's the Washington way. In the process he has ill-served both himself and the country.
And, above all, he has not served his boss, the President of the United States, very well. In fact, he seems to have abandoned him.
Small wonder Trump feels betrayed. When you lose the confidence of your boss, it's time to go. And why in hell would you even want to continue to serve under those circumstances?
Of course, Sessions has put President Trump in a difficult position as this protracted mess continues to play out in public. Firing Sessions now does not appear to be a viable option. Better for Sessions to resign just before this year's election day (November 6) or as soon as possible thereafter. And that would apply regardless of the anticipated or actual outcome of the election.
Be gone!
Posted by Dan Cirucci at 8:40 PM