A Brand Just For Misfits And Malcontents . . . 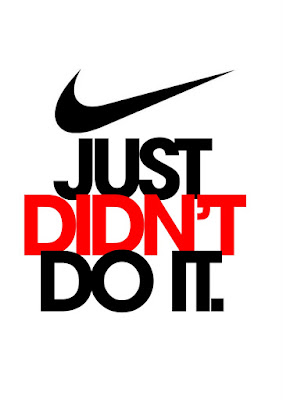 I can't say that this is a confession because there's nothing to confess.
And in fact, what I'm about to tell you is something I should probably be boasting about.
So let me just go ahead and say it: I've never been a fan of Nike. Never.
I never really liked their products; never liked their image and was never terribly fond of or impressed with their spokespersons or merchandising campaigns. Have I owned products with the Nike logo on them? Well, over a period of many decades, maybe one of two. But that was a coincidence more than anything else or it was because I could not, at that time, find a similar product without that damned swoosh on it.
I still have one piece left -- a Nike swoosh baseball cap. But I didn't buy it. It was my son's and he left it with us when he moved away. I think it's in the trunk of my car.
Anyway, as Nike rose to prominence over the years I found their advertising campaigns to be preachy, suffocating and way, way, too in your face. Their "Just do it" campaign struck me as stupid and senseless. And their corporate culture seemed relentlessly menacing.
I was much more comfortable with Reebok products. Reebok pitched a softer sell. You didn't have to be an obnoxious overachiever or hopeless wannabe to embrace the Reebok brand. Plus, I really liked Reebok's stylish and super comfortable classic white tennis shoe and I bought that product again and again.
But, counting attire and accessories, my favorite brand across-the-board was (and mostly remains) Tommy Hilfiger. Tommy doesn't own the company anymore but the brand retains his youthful, cheerful, breezy American imprint.
Anyway, what I'm trying to say is I wasn't a bit surprised when Nike took on this aging, failed football player as its spokesperson. And now he seems like he's running the whole show.
What it means is that the Nike brand is the brand of misfits. It's the company for crybabies and terminal malcontents.
And if Nike finds that profitable, well -- so be it.
But they haven't gotten my money then and they sure as hell won't get it now!
Or, to boil it down to two words: Nike sucks!
Posted by Dan Cirucci at 8:20 PM