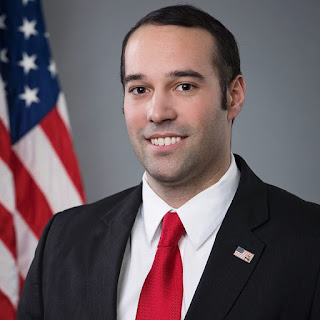 The quintessential political outsider, Fitzherbert has been a businessman, engineer, and project manager in the defense and aerospace industry for nearly a decade among two Fortune 500 companies, Textron and L3Harris. He’s been responsible for managing and delivering various military assets such as drones, ground control stations, electronic warfare testers, simulators, and area attack weapons to support the Warfighter in theater. As an executive in manufacturing, Fitzherbert has built and led successful teams to win proposals and execute multimillion dollar contracts for the Pentagon.

“Since January 2019, South Jersey has been placed on hold when it comes having an advocate in Washington to leverage our assets such as the FAA William J. Hughes Technical Center in Atlantic County, the United States Coast Guard Training Center in Cape May County, and our drone development across the region. It’s time we have a Congressman again who can secure necessary support to grow South Jersey into a diverse economy,” Fitzherbert said. “We must adapt and complement our already vibrant industries in tourism, gaming, fishing, and farming.

“South Jersey deserves a principled, relentless conservative who will work alongside President Donald Trump to deliver the results that hard-working families need and deserve. Our South Jersey community deserves a fair shake and cannot continue to suffer from Congressman Van Drew’s lack of representation. The Congressman’s first vote in Washington simultaneously hurt our community and helped elect Nancy Pelosi as Speaker. We deserve better.”

New Jersey’s 2nd Congressional District covers all of Atlantic, Cape May, Cumberland and Salem Counties, as well as parts of Gloucester, Ocean, Burlington, and Camden Counties.

Fitzherbert is a graduate of Miami University in Oxford, Ohio with a degree in economics and supply chain management. He also completed his Master's degree in Technical Management from at the Whiting School of Engineering at Johns Hopkins University in Baltimore, Maryland, studying systems engineering and project management.

“South Jersey needs a Congressman who wasn’t part of the Trenton legislature that led to out of control spending, unrealistic promises, and a cost of living that has made the Garden State too expensive to live and raise a family in. Jeff Van Drew masquerades as a moderate, but no middle of the road person would foster an economic environment that is leading to mass population exodus," Fitzherbert said.
In South Jersey, Fitzherbert has served on the City of Somers Point Economic Development Advisory Commission (EDAC) and formed and Chaired the Atlantic County Young Republican (ACYR) organization. He also serves state-wide as the Vice Chairman of the Young Republican Federation of New Jersey (YRFNJ), responsible for identifying and growing the number of next generation Republican candidates, advocates, operatives, and leaders.
Posted by Dan Cirucci at 8:41 PM