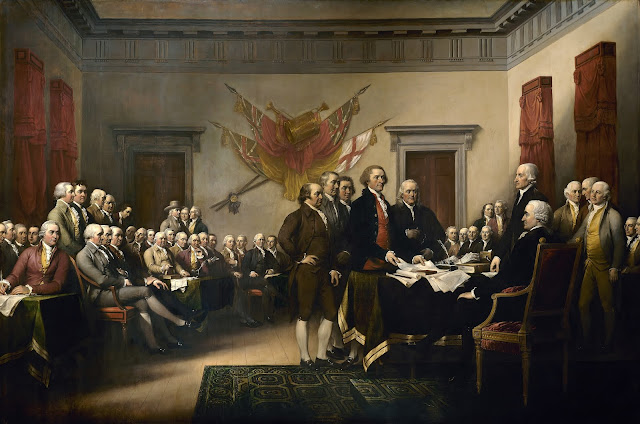 The 4th of July isn't really America's birthday.
Instead, it's the 2nd of July.
That's right: The 2nd of July is America's actual birthday.
So, America is really two days older than she says she is.
How could this be?
During the American Revolution, the legal separation of the American colonies from Great Britain occurred on July 2, 1776, when the Second Continental Congress voted to approve a resolution of independence that had been proposed in June by Richard Henry Lee of Virginia.
That's when America actually declared itself separate and apart from Great Britain.
The day was thought to be very momentous. Thus, John Adams had written to his wife Abigail:


The second day of July, 1776, will be the most memorable epoch in the history of America. I am apt to believe that it will be celebrated by succeeding generations as the great anniversary festival. It ought to be commemorated as the day of deliverance, by solemn acts of devotion to God Almighty. It ought to be solemnized with pomp and parade, with shows, games, sports, guns, bells, bonfires, and illuminations, from one end of this continent to the other, from this time forward forever more.

Of course, two days later the formal Declaration of Independence was finalized and promulgated and it contained the date, "July 4, 1776" and so that's the date that came to be celebrated.
But July 2nd is, technically, America's birthday.
And it all happened in Philadelphia -- the city that came to be known as the Cradle of Liberty.
May all Philadelphia -- and all of America -- celebrate!

And that reminds me that this also happens to be a very special birthday for former Philadelphia Bar Association executive director Ken Shear.
Happy Birthday, Ken -- and many, many more!
May all Philadelphia -- and all of America -- celebrate!
Posted by Dan Cirucci at 2:18 PM