The Most Spectacular DC 4th of July EVER? 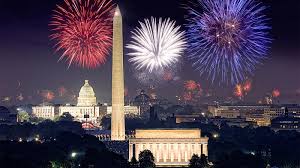 This year's annual Independence Day celebration on the National Mall, will feature music, flyovers, fireworks, and an address by President Donald J. Trump. Salute to America will honor each of the nation’s five service branches with music, military demonstrations, multiple flyovers including a flight demonstration by the Blue Angels, and much more.
One-of-a-kind music and air power experience

WJLA: The Blue Angels Will Do A Flyover During D.C.'S Fourth Of July Celebration “D.C.'s annual Fourth of July celebration will include a Blue Angels flyover… Salute to America will honor each of the nation’s five service branches with music, military demonstrations and flyovers. Participants include the Old Guard Fife and Drum Corps, the U.S. Army Band (‘Pershing’s Own’), the Armed Forces Chorus, the United States Marine Corps Silent Drill Team, and many others.” (6/28/2019)

The Hill: Trump Administration Unveils New Details About July Fourth Fireworks, Flyover“President Trump’s ‘Salute to America’ Fourth of July event in Washington, D.C., is primed to be one of the longest fireworks shows and will feature a flyover by the U.S. Navy Blue Angels. New details released by the Interior Department on Friday show that the annual spectacle that has been amped up…” (6/28/2019)

Washington Examiner: Boom: Donations to Trump’s July Fourth ‘Salute’ to Double Fireworks Display, Longest Ever“Washington’s July Fourth ‘Salute to America’ envisioned by President Trump will conclude with the capital’s longest ever fireworks display thanks to donations being made by two of America’s biggest pyrotechnics outfits.” (6/24/2019)

WTOP: National Mall Fireworks Show Promises to Be Biggest Ever, Thanks to Donations“President Donald Trump’s inaugural July 4 ‘Salute to America’ on the National Mall aimed to be big — but now it’s shooting to be the biggest fireworks display ever held in the D.C. region, thanks to donations from two of the U.S.’ biggest pyrotechnic companies… Phantom and Grucci’s pyrotechnic donations are valued at $750,000.” (6/26/2019)

Fireworks Display9:07 p.m. – 9:42 p.m.
Independence Day celebrations culminate with a spectacular fireworks display over the National Mall. The fireworks will be launched from West Potomac Park and behind the Lincoln Memorial. They will be visible from locations throughout D.C. and Northern Virginia.