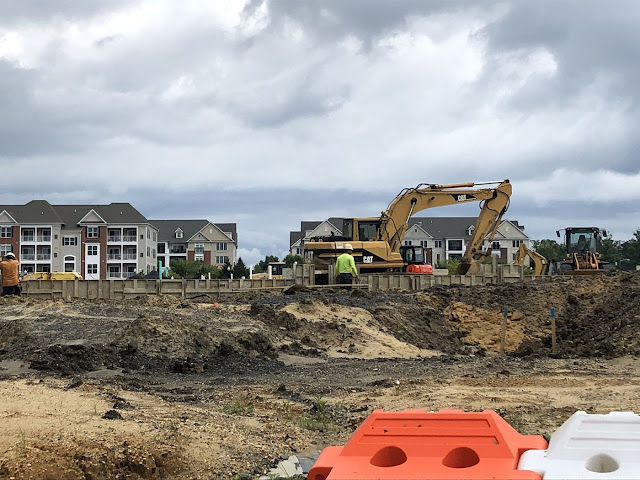 What am I talking about?
In this case I'm talking about the way that Cherry Hill Township blew a once-in-a-lifetime opportunity to create an enviable mixed-use town center where none had ever existed -- the chance for a sprawling suburban bedroom community to finally nurture an intimate, vibrant, in-town atmosphere.
The opportunity first presented itself more than a decade ago when the tract that used to be Garden State Park (once one of the nation's premier thoroughbred race courses) became available for development. It all happened after most of the rest of the township had been developed. So, that made it all that much more valuable and that much more critical to Cherry Hill's future.
And, indeed, this happened to probably the single most valuable piece of land between Philadelphia and Atlantic City.
Oh, the original plans did seem both ambitious and at least somewhat inspiring. Town planners assured residents they would give Cherry Hill something better -- a welcoming critical mass that was non-intimidating and with a more eye-appealing sense of place.
But look at it now.
The stretch bounded  by Route 70, Haddonfield Road and Chapel Avenue (the golden part of the so-called Golden Triangle) is all chopped up -- an apparent hodgepodge of big box stores, shops, condos, apartments, eateries, ongoing construction and bulldozed land with no clear patterns, no discernible boundaries, clogged highway traffic that increasingly bleeds into residential streets and nearby gas stations, convenience stores, vehicular bottlenecks, dangerous intersections and that most archaic of all contraptions  -- a traffic circle!
And now, where a hotel and offices were once envisioned, a mamouth Costco is rising -- a literal monument to gluttony! And where more residential units were planned (and would have added to a greater sense of community) two more big box stores and a Trader Joe's are set to debut along with a recently-opened hamburger joint. And all this is happening while other retail and dining (Modern Maternity, Pier One, McCormick & Schmick and Pei Wei) have closed or plan to close.
The original commercial development of the property (which largely fronted Route 70 and the portion of Haddonfield Road approaching the state highway) at least featured distinctive buildings with decorative touches. There was a suggestion of architectural unity with some sense of a town center feel.
But it's all been greedily tossed aside -- suffocated with monstrous impositions that seem to have banished any hope for streetscape sanity.
Now, handsome town homes will abut a Costco and its vast parking lot. And apartments and condos will look out over crammed loading areas for more big box retailers. Indeed, condo owners in an over-55 development were apparently given no appropriate advance notice that the planned residential tract near their property would be developed as stores and parking lots instead. And when they came out to at least try to halt attendant signage (which would seemingly encourage more traffic through their neighborhood) their pleas were rejected.
Developers will tell you it's all what the market will bear. Others will point their fingers at the great recession of the previous decade. Still others will blame changing tastes, demographics and shifting housing preferences. But underlying it all was simply an unwillingness by government leaders, bureaucrats, boards and agencies to make the right decisions at the right time -- decisions that would have prevented chaotic development and imposed some semblance of sensibility.
Instead, a familiar and ruinous craving for retables at any cost appears to have ruled the day.
File it under S -- for squandered!
Posted by Dan Cirucci at 5:29 PM