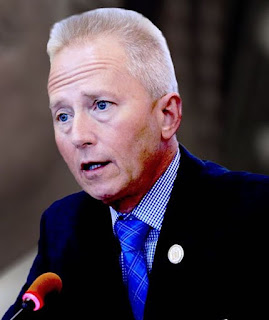 You know, Jefferson — like Thomas Jefferson, the father of the Democrat Party or William Jefferson Clinton, aka Bubba.

Can they trust Jefferson “Jeff” H. Van Drew, their newly-declared Republican congressman and candidate for re-election?

That’s a question that still seems to be gnawing at some Republicans in Van Drew’s New Jersey congressional district — a sprawling swath of the state that stretches from the bay to the southern shoreline including all or part of eight different counties.

Yes, Van Drew’s switch to the GOP was big — a sort of magical transformation of a blue seat to the red column, handing Republicans an added vote in Nancy Pelosi’s House at a very critical moment. But magic always involves a sleight of hand and often it’s what you don’t see at first that can make you look foolish later. So, skepticism is warranted, and not just among Republicans. Obviously, Democrats must justifiably feel betrayed. And independents are presumably suspicious by nature so they won’t automatically fall into line. But for now it’s the Republicans that Van Drew must focus on as he faces a primary battle in the spring.

So, how can Van Drew gain credibility with second district primary voters?

Well, Van Drew is now the highest ranking elected GOP leader in his region and one of only two Republican members of Congress in the whole state. He’s arguably the leader the GOP in the southern part of the state. That means he’s got to do more than carry the Republican banner, caucus with the Republicans and generally vote the Republican way; he’s got to step forward and lead.

And he can begin by calling a Republican unity meeting with his primary opponents, post haste. That’s where he needs to start — with those who entered the primary contest for his seat long before he did. It doesn’t matter whether he meets with each of his three opponents separately or with all of them together, say at a breakfast or lunch. Van Drew can choose whatever route he wants. But he needs to sit down with them and start to put the party together and unify for the battle ahead. This is what leaders do.

And let’s face it, Van Drew can learn plenty from his fellow GOP aspirants, especially from a rising star like Brian Fitzherbert whose restless energy, attentiveness and knowledge of emerging district-wide concerns have impressed many.

Let’s not forget that Van Drew made his party switch rather late in the game. Consequently, it behooves Congressman Van Drew to step up now and show a united way forward. In this way, he can set an example, not just for the GOP but for everyone in the district.

This is no time for petty political games.

This is a time for leadership!
Posted by Dan Cirucci at 6:30 PM