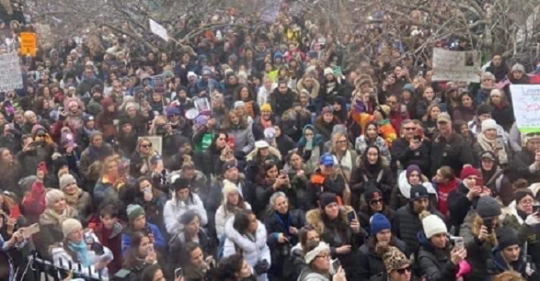 I think it's great that so many people got so riled up over this vaccination legislation that was considered by the New Jersey legislature this week.
I love the fact that ordinary people stormed the statehouse and raised hell. (I've done it myself once or twice!)
I wish they would raise this much of a ruckus over taxes and runaway state spending and the growing exodus of hard-working, productive people from our state. Oh, how I wish that would happen.
But I still think it's great that all those people were there -- engaged, angry, formidable, effective.
And, wow did I enjoy watching our new GOP Senator Mike Testa treat the crowd to the sort of effective, articulate and spontaneous stump speech that Trenton hasn't seen in ages. I love it when conservatives show some teeth. This guy coms across like a rock star! And he was wise to team with an accomplished veteran legislator like Joe Pennacchio -- a true master of the art of politics. Such a great combo, they had the boisterous crowd chanting their names. It was pure Jersey!
Still, I grew up in the era of polio -- a truly frightening scourge. And I knew people who got polio and never completely recovered. And we also had to worry about measles, mumps, scarlet fever (yes, that was still around) and other truly frightening health scares. I even remember row houses in my old Camden neighborhood being quarantined.*

And then something like the Salk vaccine came along.
So, the word "vaccine" still has a sort of instant, positive appeal to me. This shouldn't be hard for someone to understand. In the world in which I grew up, I was happy to be vaccinated even as I got pinched and poked. And I thank my parents for having me vaccinated as soon as vaccines were available.
Oh, I know times have changed. Things are different now and I'm sincerely trying to see the other side of this debate. My kids were vaccinated with no ill effects and now I have grandkids.
All I'm saying is that effective action should be balanced against a certain level of responsibility to the general well being of all. So, my hope is that the GOP will now show the way to carefully-crafted legislation (if that's what's needed) that takes all the concerns into consideration and appropriately balances competing factors. Believe me, I'm no nanny-stater.
This was probably bad legislation that was considered this week, Butt that doesn't necessarily mean that the solution is NO legislation. Now that some pertinent points have been made, maybe we all need to exhale for a moment.

* I really do remember these things. But no, I wasn't forced to walk miles to school in the snow. The school was around the corner and my parents and teachers and all the neighbors gave me scads of TLC with a bit of tough love mixed in! 😉
Posted by Dan Cirucci at 7:20 PM