The Year They Ran N-ked Through Cherry Hill

Nowadays, it's not unusual to see people parading naked through the streets.
Don't believe me?
Just show up around Philadelphia's tres chic Rittenhouse Square during Philly Naked Bike Ride Sunday in early September and you'll see more than 1,000 naked people cycling, roller blading, walking and jogging round the square and up 18th Street as they move through center city. They say they're all doing it for a cause -- the save-the-planet advantages of fueless travel propelled by your own two legs. Nobody bothers them as they roam through the city streets and even little children seem quite unfazed. 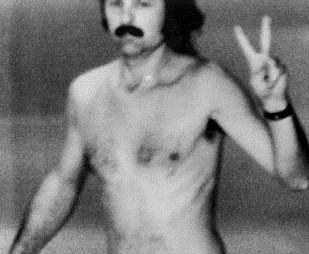 Sadly, the event's been cancelled this year due to the COVID pandemic. Too many bodies too close together, we suppose. Whatever . . .
But in the early 1970s running around in public naked was called streaking and while some thought it was just a mild form of rebellion, it could get you arrested.
Actually, streaking pre-dated the early 70s though it wasn't known by that name.
It's said that the first recorded incident of streaking in the United States occurred in 1804 by a college student at Washington and Lee University. Senior George William Crump was arrested for running nude through the city of Lexington, Virginia, where the university is located. Crump was suspended for the remainder of the academic semester, but later went on to become a U.S. Congressman and Ambassador to Chile.
But back to the 20th century.
By the mid 1970s streaking had really gained momentum and as early as 1973 Time magazine reported: “running nude is a growing Los Angeles-area fad that is catching on among college students and other groups.”
In the spring 1974 streaking came to Cherry Hill when a naked man ran up the aisle and out a nearby door during mass at St. Peter Celestine (now Christ Our Light) Roman Catholic Church on Kings Highway. The whole thing was apparently some sort of prank and it all happened when parishioner and then Cherry Mayor John T. Holden was reportedly present along with the church's pastor. It all occurred so quickly that many missed the sprint while others gasped or chuckled. By that time streaking had become a well-publicized fad.
Around the same time Cherry Hill's famed Cherry Blossom parade (which occurred each year in early May) was host to a cake-walking streaker when a member of a parading mummers band dropped trou and exposed himself to the parade-watching crowd. As a fellow band member quickly attempted to cover his colleague up, the police moved in and arrested the guy who was later charged with lewdness. Having witnessed the incident I can tell you that it was quite short, in more ways than one.
The most famous streaking incident of 1974 occurred in Hollywood during the worldwide telecast of the Academy Awards. At the Oscars, as legendary British actor David Niven prepared to present an award, 34-year-old Robert Opel (right) streaked across the stage flashing a peace sign. Opel’s run across the stage occurred when Niven was between him and the camera so nothing below the waist was visible to the TV audience. Appearing to recover quickly, the bemused Niven quipped, “Isn’t it fascinating to think that probably the only laugh that man will ever get in his life is by stripping off and showing his shortcomings?"
Posted by Dan Cirucci at 3:21 PM