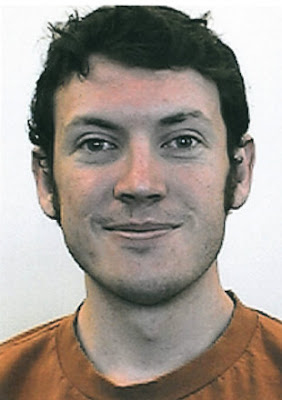 You are looking at a photo which reportedly shows James Holmes, the Colorado shooting suspect who is now under arrest
Here's what we apparently know about him: He was in the process of withdrawing from a doctoral program in neuroscience at the University of Colorado-Denver, according to a university spokesman Holmes reportedly began the program last year.
He's 24 years old and his family lives in San Diego.
So he doesn't appear to be dim-witted or necessarily downtrodden.
Indeed, his whole scheme appears to be have been quite detailed and perhaps very well planned.
Aurora Police chief Dan Oates said Holmes' apartment is booby trapped with a "sophisticated" maze of flammable devices. It could take hours or days for authorities to disarm it. Five nearby buildings have been evacuated. Oates said Holmes had no criminal record in the state.
Reports say his only previous offense may have been for a traffic violation.
And, get this: This horrific shooting seems to bear an eerie similarity to a scene in the 1986 comic Batman: The Dark Knight Returns.
In the comic, a crazed, gun-toting loner walks into a movie theater and begins shooting it up, killing three in the process. The whole passage ends with the media blaming Batman for inspiring the shooting even though he is not involved in the incident at all.