Nothing Equals The Original Chicken Delight! 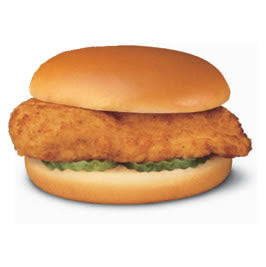 Nothing is quite like the original Chick-Fil-A sandwhich. Nothing is quite so perfect, quite so satisfying.
A friend writes of his love for Chick-Fil-A:
I felt like Chick-Fil-A today, I really did. But the Chick-Fil-A across the street from us is still an empty shell advertising "help wanted," so I opted instead for the closer, operational option -- McDonald's.
What is being prominently displayed on the McDonald's menu? The Southern Style Chicken sandwich -- a lone, seasoned chicken patty accompanied only by two pickles peaking ever-so-slightly from the plain, seedless bun. Its model was very immediately apparent, but I had to ask to be sure. The manager replied more directly than I would have expected: "Have you ever had Chick-Fil-A?"
I ordered two.
For research purposes, of course.
While tasty, the sandwiches felt altogether ... hmmm ... off. It's like trying to make your own Beef with Broccoli: the ingredients may all be there ... you may prepare it exactly the same way ... but you'll never match the way your favorite chinese take-out place makes it. It just cannot be replicated.
And in a move that McD's may have seen as an improvement, McDonald's opted for its usual, premium-sandwich paper box. But there's magic in Chick-Fil-A's little foil bag. When taken out, the Chick-Fil-A may look like it has been sat on in a warm, poorly ventilated car for a few hours, but somehow, someway, that bag marinates and strengthens the whole sandwich. The first bite into any Chick-Fil-A sandwich is always almost overpowering ...
While the McD's chicken is a near-perfect rip-off (though the McD's version is more consistently shaped), the bun is noticeably softer. The pickles are sweeter ... too sweet ... and therefore complement the sandwich less. I watched the gentleman in the kitchen prepare my sandwich, and noticed that the placement of the pickles seemed deliberately careless, unlike the truly careless preparation at Chick-Fil-A.
As I finished my chicken sandwich, I felt a little ashamed. A little like I was cheating. I thought about driving to the nearest Chick-Fil-A 20 minutes away and redeeming myself with an original, but I didn't have the stomach for it -- literally and figuratively. There's always dinner, I guess.