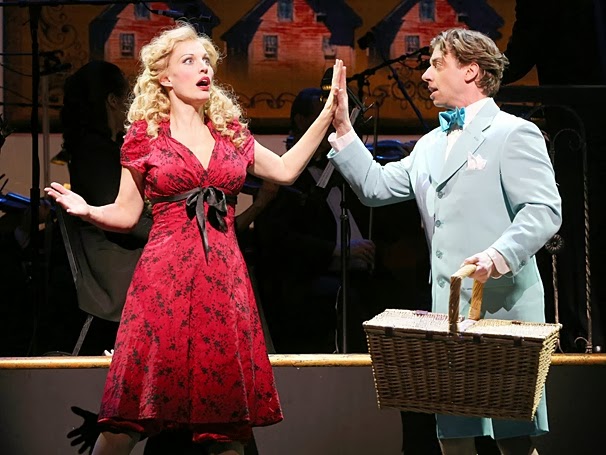 When did comedy become mean and petty?
You know what we're talking about.
What passes for comedy today is ruthless, crude and relentlessly profane. And it's all laced in brutal cynicism. It's all so smug and dismissive that they had to coin new words (or resurrect old ones) to describe it. They call it smarmy or snarky. But in fact much of it is just plain smutty.
Bottom line: It's so predictable, so unimaginative, so presumptuous that it ain't one bit funny.
That's why there's really no original musical comedy on Broadway anymore.
Well, thank goodness for faithful revivals. And thanks to Neil Simon and Cy Coleman and Carolyn Leigh who took a witty book by Patrick Dennis and in 1962 turned it into the madcap Broadway musical Little Me starring Sid Caesar, Virginia Martin, Nancy Andrews and Swen Swenson.
Little Me was fashioned for the extraordinary talents of Sid Ceasar -- a Borscht Belt veteran, saxophonist, world-class double talker and comedy king of prime time TV in the 1950s and early 60s.
Caesar was the master of live sketch comedy -- quick vignettes that often featured pratfalls, sight gags, wisecracks, satirical takes, fast talking characters and even pantomime. With a small reparatory company of performers and a first-rate team of writers Caesar triumphed over anyone and everyone in his path.
He was a veritable force of nature.
But he could also be inattentive (perhaps ADHD) and rambunctious (maybe bipolar).
So, Little Me was constructed as a series of sketches built around comedy and music with Caesar playing seven roles with multiple stage accents and frequent costume changes as he depicted all of the heroine's husbands and lovers. In short, the show was segmented into chapters depicting memorable events in the life of the fictional "great star of stage, screen and television, Belle Poitrine."
We saw the original Little Me in tryout in Philadelphia and we can tell you that Broadway has never seen anything like Sid Caesar before or since. He was nothing less than incredible as Noble Eggleston, Pinchley, Val Du Val, Fred Poitrine, Otto, Prince and Noble, Jr.
Though Little Me has been revived twice on Broadway, its revival runs were both relatively brief and we never saw it again -- until this past weekend.
That's when we headed up to Manhattan for the very limited run of the deluxe concert version of the show presented as part of City Center's wonderful Encore! series.
Little Me is as zany, outrageous and laugh-out-loud funny as any musical comedy you will ever see. Fast-paced scenes are paired with tuneful music, Bob Fosse choreography and witty lyrics and dialogue  and the show at City Center remained fresh and hugely entertaining with stars Christian Borle, Judy Kaye, Rachel York, Harriet Harris, Tony Yazbeck, Lewis J. Stadlen, Robert Creighton, Lee Wilkof and David Garrison. Borle was indefatigable in the role originated by Caesar and he led a wonderfully talented cast.
And oh, those songs! One great number follows another: The Other Side of The Tracks, Be A Performer!, Real Live Girl, I've Got Your Number, Little Me and Here's to Us. Plus, The Rich Kids Rag is one of the most inventive dance pieces ever conjured up by the great Bob Fosse.
Little Me is a smart, silly, sendup of every endlessly huckstered, ego-centered, selectively recalled celebrity memoir you've ever read.
But, here's the thing: It's not mean. It's not crude. And it's not always predictable. Even when it's poking fun at some trend or fashion or group, it's still affectionate. And even when it's making up names and places (like Belle Poitrine and Venezuela, Illinois) it delivers a double or triple laugh if you catch the  finer details. And just when you think you know what's going to happen next, it surprises you.
This is original comedy delivered with style, class and wit.
Thank goodness it's still being produced and there's still an audience for it.
And let's hope we don't have to wait another 50 years to experience it again.