So, under the dynamic coach Jay Wright, Villanova's basketball squad is once again going to the Big dance. That's nine NCAA tournament bids in the past ten years. Incredible!
No team in the region can match this record.
But Coach Wright NEVER gloats and he's always classy. 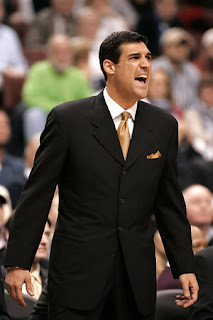 And, don't forget: Villanova is top-seeded in the east this year. And their arch rival, St. Joe's? Nowhere to be found!
Jay Wright has star quality. He behaves as he wishes his team to behave. He sets a stellar example.
And, he's the one coach who makes Pat Riley look like a slob.
So, once again (by popular demand) and courtesy of collegewingmen.com here are some other things about Jay Wright that you may not know:
1. Giorgio Armani wears Jay Wright suits.
2. Jay Wright doesn't own a mirror. He can see it in your face that he looks good.
3. Jay Wright has a suit for every day of the year. When the year is over, he throws them away and buys new ones.
4. When Jay Wright was in prep school, all the students wore uniforms. Jay Wright was still voted best dressed.
5. A bum asked Jay Wright for some change, but he gave him one of his old sport jackets instead. Now that bum is known as Donald Trump.
6. It's been predicted that if Jay Wright ever spilled anything on one of his suits, stains would be "in" for 200 years.
7. At least 12 photographers have been institutionalized from trying to find Jay Wright's best side.
8. When Jay Wright showers, the soap gets cleaned.
9. Jay Wright has been voted People's Sexiest Man Alive every year since he was five. He refuses to accept until the magazine bans St. Joe's fans from subscribing.
10. The Hawk will never die... that is until Jay Wright wants him to.
11. Villanova games don't have to be in High Definition, Jay Wright makes the TV look better.
12. When Brad Pitt looks at a mirror he says, "Damn I almost look as good as Jay Wright's shadow."
13. Every year the alumni association spends thousands of dollars to buy Jay Wright the best ties they can find. Jay uses them as his "work out ties."
14. The term birthday suit was invented when Jay Wright was born wearing a tuxedo.
BTW: Jay Wright is a multiple winner of GQ's Fashionable Four, an award given to the best dressed coach in college basketball.
Posted by Dan Cirucci at 4:55 PM