Aw . . . Can We Just Pretend It Never Happened? 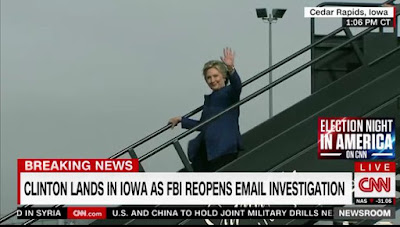 Hillary Clinton ignored shouted questions by her traveling press pool on the tarmac in Cedar Rapids, Iowa, after the FBI announced Friday that it was re-opening its investigation into Clinton’s use of a private email server after previously undisclosed Clinton emails were discovered.
Clinton reportedly gave the press just a smile and a wave as she walked down the stairs from her campaign plane and entered her waiting Secret Service vehicle without saying anything.
The press was kept waiting on the tarmac as Clinton reportedly met with advisers on the plane for thirty minutes.
Posted by Dan Cirucci at 3:53 PM