Constance H. Williams, Chair of the  Board of Trustees of the Philadelphia Museum of Art since 2010, has announced the Board’s unanimous and enthusiastic election of Leslie Anne Miller as her successor in this position.

The Board’s action at its October meeting completes an important transition in its volunteer leadership that ensures the continuity of its mission and allows for sustained growth. The Board also unanimously voted to designate Ms. Williams as Chair Emerita. She now joins previous Chairs Raymond G. Perelman and H. F. “Gerry” Lenfest, who were also honored with this title. 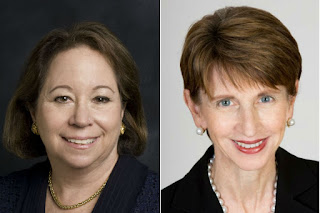 Ms. Williams (left), who will remain active as a Trustee, stated: “It has been my great privilege to serve as Board Chair during a time of great transformation at the Philadelphia Museum of Art. Over the past six years, we have strengthened this institution in many important ways, completing a major strategic plan and continuing to renew and improve our landmark main building. In my successor we have found a gifted leader who will build upon this momentum. Leslie Miller’s long and distinguished experience in government and in the nonprofit sector will combine with her deep love of art to provide a guiding vision for Philadelphia’s art museum. It is my honor to pass the mantle to Leslie.” Leslie A. Miller (right) said: “I am honored to accept this challenge, and humbled to follow in Connie Williams’s footsteps. To lead this institution, the city’s great repository of cultural treasures, is to participate in shaping Philadelphia’s future. It is a center for creativity today, an educational resource for children and our schools, a powerful economic driver, and a symbol of pride. I am thrilled to work closely to deliver on its promise with our dedicated board and the Museum’s enlightened leadership, most notably its Director Timothy Rub, and its President, Gail Harrity. Though the Museum sits high on a hill, its mission is in the heart of our community. My hope is that as the Museum continues to grow, increasing numbers of people will visit often, knowing that they are always welcome and that they will always make fresh discoveries.” A Trustee of the Museum since 2011, Ms. Miller is widely admired for her distinguished public service, what she has accomplished during her legal career, and her steadfast commitment to politics and the arts. A practicing litigator for 25 years, she served as an advisor to former Philadelphia Mayor Michael Nutter, co-chairing his finance committee and serving on his transition team. Previously, she was appointed by Pennsylvania Governor Edward Rendell to be General Counsel for the Pennsylvania Office of General Counsel, the state's largest legal entity. The first woman to hold that position, she oversaw a staff of more than 450. She also served as president of the Pennsylvania Bar Association. In 2001, she assumed a leadership role in the establishment of the Kimmel Center of the Performing Arts, serving as its president and later as co-chair of its board. Ms. Miller is married to Richard Worley, Chairman of the Philadelphia Orchestra Association. They are major collectors of American art, with a special focus on works created in the Delaware Valley. She is the author, with Alexandra Kirtley, of Start with a House, Finish with a Collection (Scala Arts Publishers, 2014). Constance H. Williams has seen the Museum achieve many milestones during her tenure as Board Chair. In 2010-2011, she played a key role in developing a new institutional strategic plan and was a guiding force in restoring the Rodin Museum in 2012-2013. She guided the successful completion of the 62,000 SF Art Handling Facility, the first of several phases planned for the implementation of the Museum’s facilities master plan, the development of interactive technologies now used in special exhibitions and throughout the Museum’s galleries, the digitization of works of art in the collection and archives, and the successful renovation and reinstallation of the galleries dedicated to South Asian art. Her leadership and generosity were critical to the Board’s pivotal decision in June of this year to authorize the construction of a central feature, called the “Core Project,” of architect Frank Gehry’s facilities master plan to renew and expand the Museum’s main building. Timothy Rub, The George D. Widener Director and CEO, stated: “We are deeply indebted to Connie’s leadership and to her tireless commitment to advancing the work of this great institution. I am especially delighted that she will become Chair Emerita and continue to serve actively on our Board. Speaking on behalf of the entire Museum staff, we also welcome the new and energetic leadership of Leslie Miller. We look forward to working closely with her and the members of the Board, both long-serving and new, on what promises to be an exciting phase of growth in the years ahead.” New Trustees, Honorary Trustee and Trustees Emeriti At its October meeting, the Board also elected five new Trustees: Ellen Caplan, Phoebe Haddon, Hilarie Morgan, Zoë Pappas, and Jennifer Rice. Lawrence Berger was designated an Honorary Trustee and Peter Davenport and Esther “Penny” Fox were named as Trustees Emeriti.

Ellen Caplan
Ellen Caplan serves on The Women’s Committee of the Philadelphia Museum of Art and was Co-Chair of the 2015 Craft Show, which generated record support under her leadership. She is a board member of the Shipley School and a board member emeritus at Abramson Cancer Center. She has been active in philanthropy at Thomas Jefferson University, University of the Arts, Abramson Cancer Center, and the Wistar Institute.
Phoebe Haddon
The Chancellor of Rutgers University–Camden, Phoebe Haddon oversees an institution with 1,100 employees. With an annual budget of more than $173 million, the campus enrolls more than 6,500 students in 39 undergraduate programs and 28 graduate programs at the master’s and doctoral levels. She had been Dean of the University of Maryland School of Law, and a professor at Temple University School of Law. She is currently on the board at LEAP Academy and is a Director Emeritus at The Constitution Project.
Hilarie Morgan
Hilarie Morgan, a former psychologist specializing in the treatment of children and adolescents, serves on boards of the Philadelphia Orchestra, the Institute of Contemporary Art, and Philadelphia Hospitality, Inc. She is a supporter of Temple University, the University of Pennsylvania, and the National Museum of American Jewish History. She is a member of the Museum’s Campaign Cabinet and the Contemporary Art Committee.
Zoë Pappas
A past president of The Women's Committee, Zoë Pappas serves on the Education, Major Gifts, and Craft Show Committees, and has supported the Museum’s technology initiatives and acquisitions for the collection. With her late husband, Dean Pappas, she generously endowed several staff positions. Zoë began her engagement with the Museum in 1986 as a Museum Guide.
Jennifer Rice
A civic leader, Jennifer Rice is president of the board of trustees at the Philadelphia School. She has supported institutions including the Institute of Contemporary Art, the Parrish Art Museum, and The Drawing Center. She also supports initiatives in education and youth development. She serves on the Museum’s Education Committee and served on the 2016 Art After Dark Committee.
Lawrence H. Berger
Lawrence H. Berger, who served as the Museum’s General Counsel from 2006 until his retirement earlier this year, has been elected as an Honorary Trustee. Prior to joining the Museum’s staff, Larry was a partner in the Philadelphia office of Morgan Lewis and a long-time supporter of the Museum. He was a member of a committee of the American Bar Association that drafted the Revised Model Nonprofit Corporation Act.
Peter D. Davenport
Peter D. Davenport, who has served actively on the board since June 2009, will continue his service as a Trustee Emeritus. He is the retired marketing director of Thomas Scientific, a private company that manufactures scientific instruments. He has served on the Museum’s Library Committee and has supported many publishing initiatives, notably exhibition catalogues produced by the Museum.
Esther “Penny” Fox
A Museum Trustee since 2000, Esther “Penny” Fox also becomes a Trustee Emerita. She has served as Vice Chair of the Costume and Textiles Committee, and serves on the Governance, Collections, and Education Committees. She is a former Park House Guide, and a member of the Women's and Craft Show Committees.
Posted by Dan Cirucci at 9:08 PM