TRUE! - The Day The Monkeys Took Over The Mall 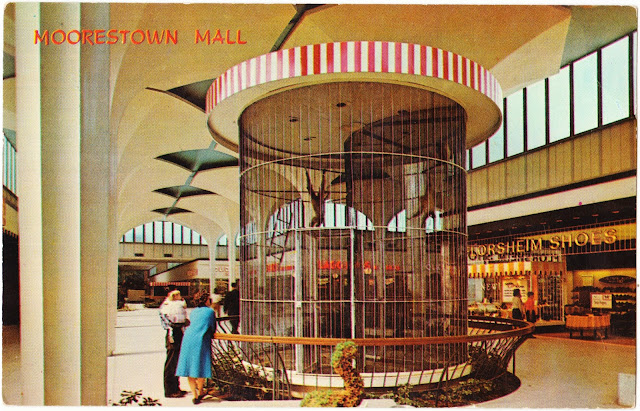 When indoor shopping malls first opened they attempted to attract customers by trading on exotic themes.
They featured real tropical trees and plants, fountains and even live animals.
The Cherry Hill Mall (the first enclosed shopping mall east of the Mississippi) boasted tropical birds in an aviary. Just down the road, the Moorestown Mall featured ducks in its indoor pond and a large monkey cage in its center court.
The monkeys were reportedly Gibbon apes and they were very frisky and could get nasty at times. They swung from parts of the cage, scurried, jumped wildly, made ear-piercing, shreeking sounds and occasionally fought one another.
Their feeding hour was a popular attraction -- just like at the zoo.
For the most part, the monkeys did their thing and the shoppers did theirs.

But that all came to an end sometime in the early 1970s when the monkeys escaped from the cage, setting off a panic at this star-crossed mall, which was always in the shadow of its Cherry Hill neighbor. Several people were reportedly bitten in the monkey free-for-all and that was the end of the monkeys at the mall.
The ducks survived for awhile longer but eventually they disappeared also as the mall eliminated water features and replaced them with those shopping kiosks that now dot the center aisle of most malls.