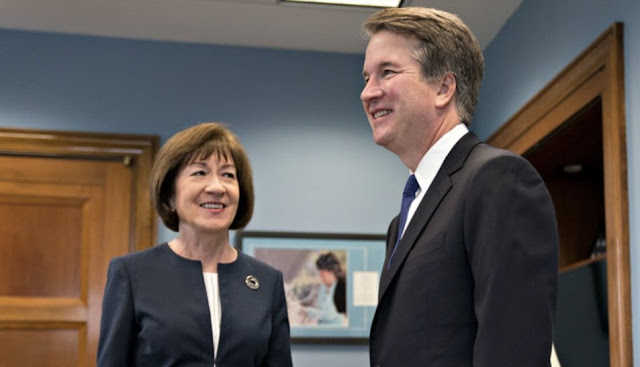 Here are the main highlights from Senator Susan Collin's historic address on the floor of the United States Senate today:

. . . today we have come to the conclusion of a confirmation process that has become so dysfunctional it looks more like a caricature of a gutter-level political campaign than a solemn occasion.

The President nominated Brett Kavanaugh on July 9th. Within moments of that announcement, special interest groups raced to be the first to oppose him, including one organization that didn’t even bother to fill in the Judge’s name on its pre-written press release – they simply wrote that they opposed “Donald Trump’s nomination of XX to the Supreme Court of the United States.” A number of Senators joined the race to announce their opposition, but they were beaten to the punch by one of our colleagues who actually announced opposition before the nominee’s identity was even known.

Since that time, we have seen special interest groups whip their followers into a frenzy by spreading misrepresentations and outright falsehoods about Judge Kavanaugh’s judicial record. Over-the-top rhetoric and distortions of his record and testimony at his first hearing produced short-lived headlines which, although debunked hours later, continue to live on and be spread through social media. Interest groups have also spent an unprecedented amount of dark money opposing this nomination. . . . .

Our Supreme Court confirmation process has been in steady decline for more than thirty years. One can only hope that the Kavanaugh nomination is where the process has finally hit rock bottom. Judge Kavanaugh has received rave reviews for his 12-year track record as a judge, including for his judicial temperament. The American Bar Association (ABA) gave him its highest possible rating. Its Standing Committee on the Federal Judiciary conducted an extraordinarily thorough assessment, soliciting input from almost 500 people, including his judicial colleagues. The ABA concluded that “his integrity, judicial temperament, and professional competence met the highest standard.

Lisa Blatt, who has argued more cases before the Supreme Court than any other woman in history, testified: “By any objective measure, Judge Kavanaugh is clearly qualified to serve on the Supreme Court.” “His opinions are invariably thoughtful and fair….” Ms. Blatt, who clerked for and is an ardent admirer of Justice Ginsburg, and who is, in her own words, “an unapologetic defender of a woman’s right to choose,” said that Judge Kavanaugh “fit[s] in the mainstream of legal thought.” She also observed that “Judge Kavanaugh is remarkably committed to promoting women in the legal profession.”. . . .

In addition to the lack of corroborating evidence, we also learned some facts that raised more questions. For instance, since these allegations have become public, Professor Ford testified that not a single person has contacted her to say, “I was at the party that night.”Furthermore, the professor testified that although she does not remember how she got home that evening, she knew that, because of the distance, she would have needed a ride – yet not a single person has come forward to say that they were the one that drove her home or were in the car with her that night. And Professor Ford also indicated that even though she left that small gathering of six or so people abruptly and without saying goodbye and distraught, none of them called her the next day – or ever – to ask why she left – is she okay – not even her closest friend, Ms. Keyser. . . . .

But the fact remains, Mr. President, that someone leaked this letter against Professor Ford’s express wishes. I suspect, regrettably, that we will never know for certain who did it. To that leaker, who I hope is listening now, let me say that what you did was unconscionable. You have taken a survivor who was not only entitled to your respect, but who also trusted you to protect her – and you have sacrificed her well-being in a misguided attempt to win whatever political crusade you think you are fighting. My only hope is that your callous act has turned this process into such a dysfunctional circus that it will cause the Senate – and indeed all Americans – to reconsider how we evaluate Supreme Court nominees. If that happens, then the appalling lack of compassion you afforded Professor Ford will at least have some unintended positive consequences. . . . .

We live in a time of such great disunity, as the bitter fight over this nomination both in the Senate and among the public clearly demonstrates. It is not merely a case of different groups having different opinions. It is a case of people bearing extreme ill will toward those who disagree with them. In our intense focus on our differences, we have forgotten the common values that bind us together as Americans. When some of our best minds are seeking to develop ever more sophisticated algorithms designed to link us to websites that only reinforce and cater to our views, we can only expect our differences to intensify.

This would have alarmed the drafters of our Constitution, who were acutely aware that different values and interests could prevent Americans from becoming and remaining a single people. Indeed, of the six objectives they invoked in the preamble to the Constitution, the one that they put first was the formation of “a more perfect Union.”

Their vision of “a more perfect Union” does not exist today, and if anything, we appear to be moving farther away from it. It is particularly worrisome that the Supreme Court, the institution that most Americans see as the principal guardian of our shared constitutional heritage, is viewed as part of the problem through a political lens.
Posted by Dan Cirucci at 8:55 PM