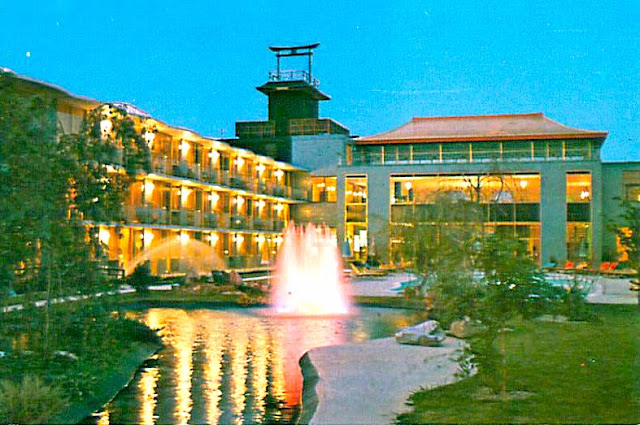 An Asian-themed getaway next to a legendary mecca for the stars right smack in the middle of a burgeoning suburban community. It featured jade ornamentation, shimmering accents and a gold-plated roof that became a local landmark.

This was The Rickshaw Inn.

Built in 1964, The Rickshaw Inn was a 180-room hotel with a gold-plated roof, which was situated on Route 70 in Cherry Hill, New Jersey, opposite Garden State Park and adjacent to the Latin Casino, a popular niteclub which had relocated to Cherry Hill from Philadelphia a few years earlier. Frank Sinatra and his 'Rat Pack' entourage, Don Rickles, Steve and Edie, Smokey Robinson, Diana Ross and other elite acts performed at The Latin - and stayed and drank at The Rickshaw.

The celebrities, musicians and their hangers-on from "The Latin" often drank in the lobby bar long past the official 2:00AM "last call" mandated by the NJ ABC; but this was winked at by local officials. The luxury cars of politicians, celebrities and businessmen were parked "up front" under the Rickshaw's covered entryway At the time, it was the most luxurious inn and restaurant in the South Jersey/Philadelphia area.

The gold-roofed pagoda atop the Rickshaw Inn offered a spectacular view of Garden State Park's track and finish line, prompting Garden State owner Eugene Mori to plant a row of tall cypress trees to block the view from the Rickshaw.

In August 1965, Frank Adamucci, a co-owner of the Rickshaw with Dominick Vitese, was shot to death in the lobby of the hotel. Originally thought to be a "mob hit" due to the single shot and fast departure of a "getaway car", investigators within days linked the killing to a botched robbery. Detectives arrested Bobby Lee Mayberry, William Kestner and John Miller, who had been "casing" the Rickshaw for weeks and took note of Adamucci's propensity for greeting guests entering the Rickshaw's opulent lobby. Witnesses stated that the fatal shot occurred when Adamucci, angered at Mayberry prodding him toward the office and safe pushed at Mayberry's arm, causing the pistol to fire a single shot that pierced the businessman's chest.

Investigators caught their "big break" when a bartender at a nearby lounge recognized the trio, who met frequently while planning the botched robbery. The three were memorable to the bartender because they ordered a drink known as an "Orange Blossom" - not a typical choice in a shot and beer taproom.

Camden County Prosecutor Norman Heine lead the state's case at the subsequent trial, and, during Heine's intense questioning, Bobby Lee Mayberry suddenly blurted out "I did it! I shot Adamucci!!" in a witness stand confession worthy of Perry Mason. Heine was later appointed to the New Jersey Superior Court and "State vs Mayberry" is still studied in law schools as an example of a prosecutor provoking a witness-stand confession.

The onset of casino gambling in Atlantic City brought an end to The Latin Casino and the end of the Latin's elaborate entertainment slowed the pace at the Rickshaw Inn as well.

The massive 1977 fire at Garden State Park's grandstand directly across from the Rickshaw rained down flaming embers on the famed gold roofed pagoda, but the Rickshaw was spared from damage.

In the 1980s the Rickshaw was stripped of its Asian-styled decor and golden roof, renovated to externally resemble the new Garden State Park grandstand and renamed the Garden Park Hotel. The Garden Park was not financially successful and was eventually closed over code violations. A plan to convert it into a senior citizens' residence failed, and in 2002 it was demolished. A Mercedes-Benz dealership moved to the site in 2006.