She Was An Incandescent Bounty Of LOVE! 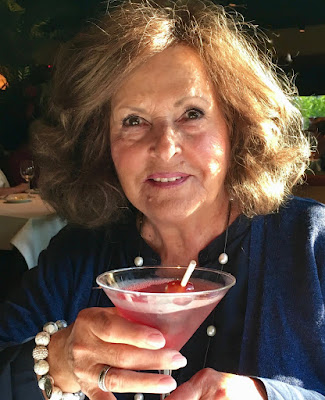 My sister, Lenora Annibale, would have been 79 years old this Sunday, October 21.
But she only made it to 77.
She remains deeply missed and dearly beloved.
Lenora was one of the last persons on earth to know me from the time I was born -- and, as the years went by, she and I naturally grew closer.
Since the death of our parents in 1988 and 1999 respectively, no one on this earth knew Lenora longer than I did and few knew her better.

Lenora's name was as unique as she was. Indeed, she prided herself on having a name that few others shared.
And when you saw or heard her name, you immediately wanted to add an explanation point to it. It just seemed right: Lenora – slash, dot.
Because she lived her life – all her life – with an explanation point. And, since she was my sister, I was fortunate to partake of it all and wise enough to know that in terms of charm and personality I could never, ever compete with her.

Lenora had a natural way with people. She could talk to anybody -- anyone from a total stranger on the street to the President of The United States. She was fearless about that and she was also a natural-born salesperson. What she was "selling' depended on the moment. But, once she focused on you, she cast a magical spell. She made you feel special -- like you were the only person in the world. To this day, many people tell me they would seek Lenora out simply because she was so great to be with -- she made them feel better, livelier, happier, more "in the moment".

Lenora was a vivid personality. And she had such a zest for life that I called her “an incandescent force of nature” or the "bounty of love itself".

Sometimes I joked with her that she was truly unsinkable – virtually indestructible. But she always cautioned me not to make such assumptions. After all, she fought two valiant battles with cancer and had both hips replaced. But these were things Lenora almost never spoke about, never complained about and never dwelt on.

It’s not that Lenora didn’t know she was vulnerable and breakable, like the rest of us. It’s just that, as far as anyone could tell, she simply ignored it.

Some people dip into life cautiously, with a demitasse spoon. Not Lenora. She used a ladle – passionately scooping up all the good stuff. Maybe Lenora knew that she would not live as long as either of our parents (and only a bit longer than her husband) and that caused her to soak up life so ravishingly. Who knows?

There were so many things she liked -- things she actually dived into with total abandon. Dining,  shopping, travel, fashion, jewelery and entertaining were among her passions. She enjoyed a great movie, a spirited political campaign, an engrossing TV series and just about any sport that featured a winning Philadelphia team. But, above all, she loved children. She simply knew how to be totally in touch with them. And children loved Lenora because they know she was real -- they knew that her feelings were honest and heartfelt.

My mother always said Lenora should have been born a Vanderbilt because that’s the way Lenora wanted to live. As for Lenora herself, she simply chose to live a Rolls Royce life even though she often found herself in a Chevy environment. I honestly don’t know how she did it. The only person who knew the secret to that was her late husband (and one true love) Frank and he took the secret with him.

Still, when all was said and done, nothing was more valuable to Lenora than love and no love was more important than the love of family. She was a devoted daughter, a wonderful sister, a loving wife, a hugely loving mother and grandmother, an effervescent and all-time-favorite aunt, an incredible sister-in-law, a great cousin and, as many of you know a loyal and cherished friend.

Two phrases can sum up her life and each one is no more than three words. The first is this: Enjoy each day. Enjoy each moment the way Lenora did --and remember her for that. And the second? Those are the three words I will leave you with: Love one another!
Please click here to see lots more from the Dan Cirucci Blog!
Posted by Dan Cirucci at 4:17 PM