When Broadway Came To Cherry Hill - Every Night! 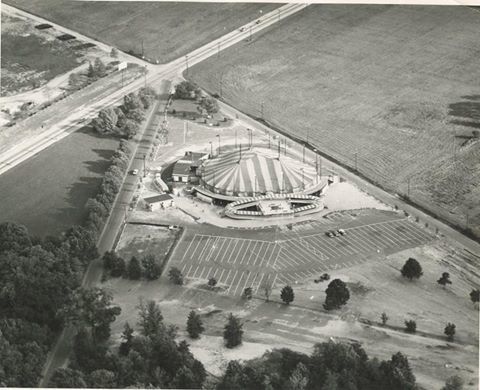 Night after night, Cherry Hill glittered with the greatest stars of Broadway.
Big shows, big crowds, music, dancing, costumes, sets and certifiable Broadway stars were the norm, right in the center of Cherry Hill.
It all happened at Brace and Bortons Mill Road at the edge of the Camden County Park. If you go to that intersection now you will see a gazebo and park facilities including playgrounds, basketball courts and a jogging track.
But once upon a time, every summer, a tent rose at this sight and Broadway came alive at the Camden County Music Fair.
At the Music Fair, Gordon MacRae starred in Oklahoma, Angela Lansbury reprised Mame, Richard Chamberlain made West Side Story come alive, John Rait sang On A Clear Day You Can See Forever, and Julie Newmar appeared in Sweet Charity.
At the Music Fair I saw Stephen Sondheim's Follies, Oscar Hammerstein's Carmen Jones and the Broadway hit Bye Bye Birdie. The Music Fair also featured Broadway tryouts like the budding musical A Joyful Noise and big stars like Judy Garland in concert.
When Judy appeared at the Music Fair (the last time was just a couple of years before she died of an overdose) it was always a sort of crapshoot. Would she show up? Would she be in top form or would her performance be sketchy? If you were lucky, you saw one of the greatest entertainers ever in one of her top performances. After the show, Judy could often be found at Henry's watering hole on Haddonfield Road where she held court (in a manner of speaking) till the wee hours of the morning. Doubtless, she ran up quite a tab.
At one time Cherry Hill hosted both Garland and Sinatra when Judy appeared at the Music Fair while Frank half forth just up the road at the Latin Casino.
Under the music tent things could get sketchy. The show was in-the-round so staging could be a challenge. Performers got dressed in temporary quarters and entered and exited through the aisles. Furthermore, weather was always a factor. If a thunderstorm competed with the show (a not uncommon summer event) all acoustical bets were off. The Music Fair also used star-struck high-school and college students to staff the venue and parking was makeshift on ground leased from the Camden County Parks Commission.
The triumvirate that ran the Music Fair (Lee Guber, Shelly Gross and Frank Ford) also oversaw two other tents: one at Valley Forge and one in Shady Grove, Maryland. Consequently, they were able to move shows from place to place and guarantee at least a three-week run for any production.
Eventually, Frank Ford left the partnership and the Valley Forge venue became a permanent (and quite lucrative) in-the-round performing arts center that could book entertainment year round. With that, the Camden County and Shady Grove sights were closed.
In the end, even Valley Forge was forced to shuttle and the property was sold off to became a shopping center and supermarket.
Times had changed. People didn't want to watch shows under tents (with no air conditioning) when they could go to Atlantic City or large arena venues and be entertained in comfort.
What was called the summer "straw hat circuit" was no longer viable.
And today, it's just a gazebo. There isn't even a plaque to mark the sight where Broadway came to Cherry Hill.