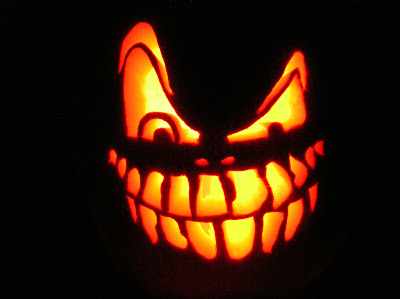 We're talking about the emergence of Halloween as America's biggest phenomenon.
Yes, Halloween!
Which means that, pretty soon when those garish, pop-up Halloween costume stores finally close, we'll breath a sigh of relief.
We'll also be glad that we won't have to witness the sight of idiotic grownups dressed for Halloween in ridiculous costumes. Grownups have helped to ruin Halloween.
Repeat after us: Halloween is for children. Real children!
Did you dress in costume as a child and trick or treat? Fine! That's enough. Okay?
Halloween was never, ever meant to be a schlock fest. Nor was it meant to be an adult drunk fest.
There is so much Halloween 'junk' for sale in the stores and so much Halloween stuff adorning homes that the trend is truly scary. When Halloween begins to rival Christmas as a holiday, you know we've got a problem. And it is rivaling Christmas.

Halloween is now so big that Americans spend almost as much on this faux-holiday as they do on Christmas. And Halloween is now the third largest party occasion, after New Year's and The Super Bowl. More candy is sold on Halloween than on Valentine's Day and people will actually send each other 28 million Halloween cards.
I don’t know about you but I’m not longing to receive a Halloween card from anyone. And it’s been decades since I’ve been out trick or treating.
Don’t get me wrong. I’m all for children enjoying the day dressed as ghosts, goblins and super-heroes and I’m happy to greet them. . . .For children Halloween is a way of gently dealing with fright and fear while having some old-fashioned fun.
But grownups seem to have forgotten this and they’ve now set about stealing Halloween from the kids. Today, huge numbers of adults celebrate Halloween and at least half of them spend more than $100 each doing so. To me there’s nothing more awkward than a grownup trying to trick, astound, frighten or repulse somebody by wearing a Halloween costume. Most costumed adults look just plain dumb. Let’s face it, many of these people don’t need costumes to begin with and some of them are downright frightening no matter what time of the year it is.
But people will find countless ways to make fools of themselves and so the costume stores now start appearing in early August. When I see some costumed lackey trying to wave me into one of those huge, tacky Halloween stores I run in the opposite direction.
Still, I’m starting to feel like I’m the only one not costumed for Halloween. Even dogs have gotten into the act. Where did this dreadful trend start? Who was it that first thought: “Hey, let’s strip our beagle of whatever bit of doggy dignity it may have had by forcing it to wear a tiara and a tutu.” Dogs in costume look totally bewildered, and rightfully so. Dressing them up and parading them around on Halloween is just this side of cruel.
In fact, the whole Halloween situation is out of proportion. Haunted houses are a good example. Isn’t the world frightening enough without paying to visit a haunted house or participating in some other type of contrived horror? Why would you spend your money this way?
And why would you decorate your house in orange lights? When you think of it, orange is a pretty garish color to begin with. It should be used sparingly, if at all. Its time on the scene should be mercifully limited. But now we’re awash in a virtual sea of orange from mid September onward. Ugh!
To me, natural, seasonal adornments are fine. But now driving through suburbia I’m assaulted by Halloween lawn decorations included animated witches, skeletons and ghouls. And the strangest custom of all involves people who put tombstones on their front lawn. Think about it: Why would you turn your front lawn into a cemetery? Why would you welcome death itself to your door?
I pose this question because when you think about it Halloween is all about death. Its ancient origins are said to lie in Celtic traditions observing the night when the Celts believed the dead returned to earth. With the coming of Christianity, this festival was turned into Halloween – the eve of All Saints and All Souls days. But the observance is still rooted in death.
When an observance that celebrates death begins to rival Christmas as one of our biggest holidays we’ve got a problem. My solution: put a few pumpkins out, sip some cider, enjoy the fall foliage and let the dead rest in peace.