And Now, Five Of Our Favorite Christmas Classics! 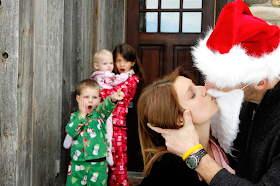 
1) Have A Holly Jolly Christmas - The original version by Burl Ives is still the best!

2) I Saw Mommy Kissing Santa Claus - The Jimmy Boyd original is tops! It reached number 1 on the Billboard charts in 1952, and on the Cash Box magazine chart at the beginning of the following year. The song was commissioned by Neiman Marcus to promote their Christmas card for the year, which featured an original sketch by artist Perry Barlow, who drew for the New Yorker magazines for many decades.

3) Christmas Time's A 'Comin (and I know I'm goin home) - Don't settle for anything less than the Bill Monroe bluegrass version.

4) It's A Wonderful Life - If you miss this class Frank Capra Christmas movie, you've missed Christmas itself!

5) A Christmas Carol - Watch ONLY the black and white 1951 movie version of this classic tale starring Alistair Sims. No others can match it.

Christmas reached a sort of zenith in America in the 1950s. It was a glorious time for home, family and Christmas. Maybe it was the aftermath of the war and the prosperity that followed that made everything so Christmasy. Or maybe it was just those crazy 50s novelty songs, all that sentimentality and brave new inventions like spray snow that made the difference. Who knows?
Posted by Dan Cirucci at 4:31 PM