The Dangerous Canonization Of Saint Ruth . . .

Politico magazine is leading with a surprising article (by Peter Canellos) titled "Why We Should Worry About The Cult Of RBG."
It's all about Supreme Court Justice Ruth Bader Ginsburg, the subject of a new motion picture and countless books as well as at least one notable documentary. In fact, here's how Politico puts it: 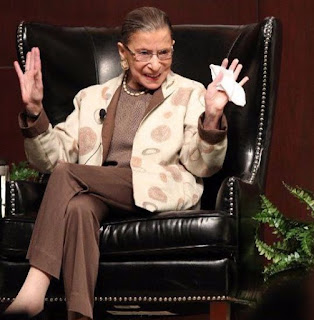 RBG the current-day gladiator, as much as the figure of history, fills the Ginsburg cart on Amazon this holiday season. Fans can choose from four biographies, five children’s books, a coloring book, a workout book, an action figure, an “historic Ruth Bader Ginsburg notebook,” a throw pillow and a robe-bedecked figurine. The book titles alone attest to an effort to present her as a rebuke to the current state of judging: “The Notorious RBG,” “The Unstoppable Ruth Bader Ginsburg,” “No Truth Without Ruth,” “I Dissent.”

Yes, lefties have long since catapulted Ginsbrug into their personal stratosphere and now they're in the process of canonizing her. And, make no mistake about it, this is a cult -- a dangerous cult. And when a left-leaning source like Politico comes right out and not only admits it but warns about it, you better believe it.
The way Politico puts it, Ruth Bader Ginsburg would never have become a groundbreaking civil rights lawyer who won important decisions for women's rights had there not been independent-minded judges and justices appointed by both political parties who were willing to see things her way. In other words, they were willing to break from a rigid, hard-nosed ideology and judge fairly.
And that simply makes a strong case for a non-politicized judiciary.
But now Ginsburg herself has become pretty much a symbol of a bitterly divided court and the dean of the resentful (and resisting) side of the bitter political divide. She's allowed herself to become an ideological queen -- a liberal goddess.
And she seems to relish it -- being the center of a cult and shouldering on against all odds, even well beyond the point where others might have packed it in.
OK, so she has no intention of leaving. But while Justice Ginsburg is still on the court, shouldn't she at least want to be seen as fair, open-minded and devoid of a political agenda? The truth is, she seems about as far removed from that characterization as one can imagine.
Again, to quote from Politico magazine:


Social progress depends not only on passionate advocates, but also on open-minded judges. The best aren’t necessarily the ones who are most predictable, or most politically galvanizing to their bedazzled followers.

Hmmm . . . maybe that's all just too much to expect, especially from Justice Ginsburg and especially now.
Posted by Dan Cirucci at 7:56 PM