What Books Have YOU Read This Year?

I love to read. And I'm never without a book -- sometimes two or three.
I read both on screen books and actual old-fashioned books with real pages. And my interest roams through the popular culture, politics, history and current affairs.
I've always loved biographies and autobiographies and I've found real life stories to be far more interesting and enriching than fiction. Consequently, I almost never read novels.
Here are just a few of the books I've read this year:

Let Trump Be Trump
By David Bossiie and Corey Lewandowski, this book is a fascinating look inside the 2016 Trump campaign -- perhaps the most historic election campaign in recent history. It gives you a view of Donald trump that you simply will not find anywhere else. 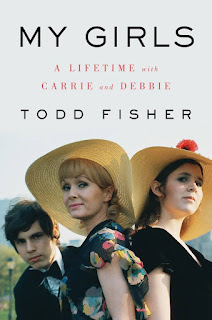 My Girls
The inside story of Carrie Fisher and Debbie Reynolds as told by Todd Fisher, Carrie's brother and Debbie's son. A glimpse into 1950s, 60s, 70s and 80s Hollywood with side trips to Vegas, New York, London, Paris and places you might not expect. The tortured, difficult world of the offspring and sibling of entertainment legends. Uproarious one minute and heart-breaking the next.

Lady In Red
An "Intimate portrait" of Nancy Reagan by her former press secretary Sheila Tate. This is the three-dimensional, very human Nancy Reagan revealed in stories and anecdotes -- a Nancy you might not have known till now. A must-read memoir!

On The Road And Off The Record With Leonard Bernstein
All the secrets -- all the passions, grudges, brilliance, pettiness, daring, and recklessness revealed by Bernstein's one time personal assistant Charlie Harmon. This is a really juicy read that examines the secret and not-so-secret world of the legendary maestro.

The Last of the Duchess
Caroline Blackwood's somewhat manipulative tale of the sad, desolate, lonely last years of the Duchess of Windsor -- the woman who shook the foundation of the monarchy and, arguably the British empire -- or what was left of it.

Wallis In Love
A companion to the above book (and this one probably should be read first) is Andrew Morton's tale of how Wallis Warfield Simpson, a twice-divorced spinster, schemed to win the heart of the future King of England but lost her bid to become Queen. This left the Duke and his conniving Duchess roaming the world looking for some semblance of relevance.

Atlas Of The 2016 Elections
The complete story of the election told in charts, tables, maps and graphs. More than you ever wanted to know about what really happened in 2016 and what it may foretell for the future. Absolutely enthralling.

Unmasked
In this tome, musical genius Andrew Lloyd Webber tell his life story -- but not the whole story. In what is probably just a first volume, this world-renowned composer takes us up to the opening of Phantom of the Opera. What an incredible ride it is!

Mother Angelica
Raymond Arroyo's definitive biography of the nun who who funded the most successful Catholic communication engine ever devised -- the EWTN TV network which now reaches millions of people all over the world. A thrilling and inspiring story about a member of the clergy whose insight, devotion, fervence and guidance are sorely missed.

Trump, The Blue Collar President
By Anthony Scaramucci,  this book turns out to be more about Scaramucci and his odyssey than it is about Trump. Still, it's a fun and entertaining read in which "the Mooch" attempts to explain his lightening quick rise and fall in the Land of Trump.

Reagan, An American Journey
Bob Spitz has given us the book we've all been waiting for. More than five years in the making, based on hundreds of interviews and access to previously unavailable documents, and infused with irresistible storytelling charm. Put this at the top of your list!

Something Wonderful
Todd Purdum examines Rodgers and Hammerstein's Broadway as no one else has. If you love the classic, golden age of Broadway musicals, this is the book for you. Purdum delves deep into the world of R & H and explains how they made those great shows and why they never really became close friends or confidants. Truly rich!

Growing Up At Grossinger's
Tania Grossinger's tale of life at the famed Catskill resort that came to define Jewish summers for both the strivers and the arrivers. Think Dirty Dancing meets Stand By Me. This is a coming of age story with an unusual setting and some really tasty tales.

Memories Are Made Of This
Deana Martin's memoir about her father, Dean with recollections of the complicated family life of the various children of an enigmatic and somewhat distant dad. Dean Martin was no saint but his loving daughter highlights the crooner's better qualities and tries her best to give us a view of a hard-working, caring pater familias.

My Autobiography
Charlie Chaplin's story of his own life. The hardship that this man suffered through his childhood and formative years (and even into early adulthood) will absolutely break your heart. But this is ultimately a story of triumph rooted in the unforgettable experiences of the Little Tramp himself. Spellbinding!
Posted by Dan Cirucci at 7:15 PM