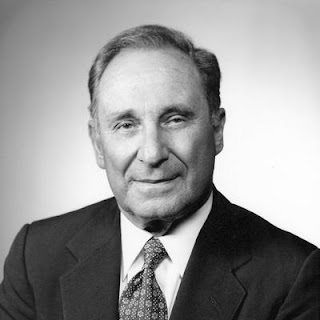 At this time of year it's not uncommon for us to remember dear friends and vivid personalities who have left us during the past twelve months.
One of those (who actually passed away quite recently) is Seymour (Sy) Kurland.
Sy Kurland was Chancellor (President) of the Philadelphia Bar Association during 1987, the year that marked the bicentennial of the U. S. Constitution -- the law of the land. If you know anything at all about lawyers, you know that they revere the Constitution of the United States and hold it higher regard than most of our other sacred documents.
Sy Kurland and the year he served as Chancellor of the nation's oldest bar association -- well, the two were just made for one another. You must remember that the Philadelphia Bar Association counts among its original members men who were signers of the Declaration of Independence. Chartered in 1802, the association's life is intertwined with the life of our nation.
A diminutive man, Sy had a rapier wit that made you think and chuckle at the same time. He could mimic a stuffed-shirt colleague one minute and charm him the next, if he had to.
Sy was a restless man who believed in total engagement when it came to both work and play. A student of Ralph Waldo Emerson, he took to heart Emerson's advice: "Do not go where the path may lead, go instead where there is no path and leave a trail." Sy climbed Mt. Kilimanjaro, explored Machu Picchu in the Andes and ran with the bulls in Pamplona. His zest for life was was phenomenal.
Never one to be contained within the narrow confines of the law, Sy was interested in art, literature, the theater, movies, music, travel, adventure -- the whole world. He was not only keenly attuned to the popular culture and the thoughts and personalities that defined his era but he was also a very fine writer.
This presented a challenge for me as I was the designated wordsmith for the chancellors of the bar. That was my job. But how could I be the writer for a chancellor who was already an accomplished scribe? What would that man want with my talents?
Well, it turns out we each learned from the other. Sy introduced me to writing that wasn't afraid to tackle philosophy and consider life's deeper meaning. And I helped to turn his prosaic writing into the spoken word as he delivered numerous remarks during the year and enjoyed getting up in front of an audience. Together, we also fashioned more than a few memorable sound bites long before the age of Twitter.
In 1986, when 17 Philadelphia judges were implicated in a scheme that accused them of accepting cash from the local roofers' union, Sy was the bar's designated spokesperson -- the man who had to step before the media and comment on the alleged [unthinkable] crimes. And he had to do it quickly because the public needed to know that this would not stand. Together, we fashioned this statement: "The thought of a judge accepting cash in a plain brown envelope from a union official is reprehensible." And that statement ( with the key word, reprehensible) became our touchstone over the next year as the legal repercussions of the dastardly deeds unfolded.
It was not a pretty sight nor a happy time for the legal profession in Philadelphia. But Sy never flinched. He never backed away from his responsibility and he never soft-pedaled the profession's appropriate outrage in the face of such a breach of public trust.
In 1988, Sy was recruited by then-Mayor W. Wilson Goode to serve as Philadelphia's city solicitor. He held the job until 1990. In  that post he set high ethical standards and, as was his custom, surrounded himself with a coterie of bright young lawyers, welcoming their talents and encouraging them to challenge him and one another as they went about their business.

Though he recognized the importance of order and respected the structure that the law necessarily imposes, Sy hated rigidity, narrow thinking and dogma. As a longtime mentor to others, he sought to create an atmosphere of intellectual elasticity, curiosity and expansiveness.
In fact, it was Sy who introduced me to the landmark work of Allan Bloom, The Closing of the American Mind, a book that was way ahead of its time.
Following his term as city solicitor, Sy joined the Center City law firm of Dechert LLP for several years before retiring in June 1999.
At a 2008 Philadelphia Bar Association ceremony marking his 50 years as a lawyer,  Sy spoke of a half-century of change.
"When I graduated, I was sent to Wolf Block, because that's where the Jewish boys were," he told the Bar Association magazine. "[Federal Judge] A. Leon Higginbotham Jr. [an African American] couldn't even get an interview with a big firm. And the women in my class, none of them could expect to become partners. I don't remember any Hispanic lawyers from that time. But all of that has now changed."
Never one to simply fade away, in retirement, Sy was tapped as a special master by his friend and colleague, U.S. District Judge Norma L. Shapiro to conduct hearings in a case filed by tenants alleging poor conditions in buildings administered by the Chester Housing Authority in the late 1980s.
The buildings were seized by the U.S. Department of Housing and Urban Development in 1991. Due to the litigation, conditions improved. There has been a waiting list for the units over the last decade, the Delaware County News Network wrote on April 25.
"Sy drew upon his humanity and sense of justice in administering these disputes and made a substantial difference in the lives of the residents," his family remembers.
Sy Kurland believed that the challenges of daily life and the discipline of  hard work made us better and stronger in the long run, even if we sometimes could not see past our day-to-day or week-to-week problems. He also felt that the struggles and hardships that are an inevitable part of everyday life needed to be tempered by the sort of irreverent humor that exposes those who would exploit us or bedevil us at such times. Mindful, always of the words of Emerson (To be yourself in a world that is constantly trying to make you something else is the greatest accomplishment) Sy Kurland could spot a poseur a mile away and he abhorred snobs of all kinds.
He was an original.
He was my friend.
And he remains one of the most unforgettable characters I have ever known -- and an enduring inspiration.