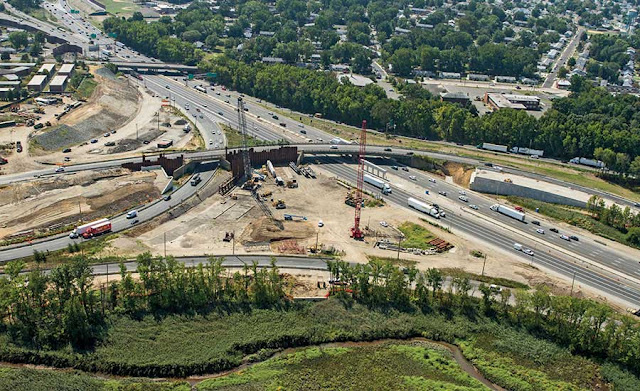 Are you still wondering when that big 295-42-76 road project in South Jersey will be finished.
Well, unless it's running ahead of schedule it won't be finished till the fall of 2021.
Here's an explanation that we ran about six years ago when the project kicked off. This should tell you all you need to know but please don't ask us what phase we're in now. The final phase, we hope:

Well, hang in there. because, thanks to Governor Chris Christie and his administration relief is finally on the way. Wouldn't you know it would take someone like Chris Christie to finally move things off the dime and get this project underway? And underway it is!

Today, New Jersey Lt. Governor Kim Guadagno was joined by New Jersey Department of Transportation (DOT) Commissioner James Simpson in Bellmawr to break ground on the $900 million federally funded Direct Connection project that will provide a seamless route for I-295 motorists traveling through the interchange of I-295, Route 42 and I-76 in Bellmawr, Mt. Ephraim and Gloucester City.

“After a decade of planning, design, engineering and community involvement, today’s groundbreaking represents the final phase of a project that will help reduce crashes and improve traffic flow along the busiest stretch of highway in this southern New Jersey region,” said Lt. Governor Guadagno. “The new route will also benefit local residents who are regularly subjected to traffic congestion on their streets when crashes within the interchange prompt motorists to divert to local roads.”

Approximately 250,000 vehicles travel through the interchange each weekday to and from Camden, Philadelphia and other destinations. The current configuration requires I-295 motorists to exit the interstate and weave across other congested highway lanes to return to I-295. The project will eliminate dangerous merge conditions by building a viaduct that carries I-295 traffic over Route 42 and I-76.

“Under the Christie Administration, investments in our transportation network are guided by a handful of key metrics, including the safety, operational performance and quality-of-life benefits that this project will produce,” said DOT Commissioner Simpson.

DOT has awarded a $160 million construction contract to PKF Mark III of Newtown, Pennsylvania. Pre-construction work will begin immediately, with shovels in the ground by the end of March or early April.

Under the first contract, work will be carried out along I-295 south of Essex Avenue, along I-76 in the Market Street area and along two Route 42 ramps. The Creek Road and Bell Road bridges will be replaced and several stretches of roadways will be temporarily widened to accommodate work under future contracts. Work under this first contract is expected to be completed in the summer of 2015.

The project has been designed to minimize inconvenience to motorists. During Contract 1, NJDOT anticipates only several evenings and weekends of ramp closures in the vicinity of Market Street and Route 130. I-295, Route 42 and I-76 will remain open to traffic throughout the entire project.

The project has been divided into four separate construction contracts, with completion of the fourth and final contract in the fall of 2021. The I-295 mainline direct connection will be built under Contract 3, scheduled to begin in 2016 and to be completed in late 2019. When work under that contract is completed, I-295 southbound traffic will start using the new viaduct, but I-295 northbound traffic will not be using the new bridge until new ramps are built under the fourth and final contract.

Work is already underway to install Intelligent Transportation Systems (ITS). This system includes Dynamic Message Signs to alert motorists of roadway incidents or congestion, travel-time readers and adaptive traffic signal control systems along portions of Routes 168 and 130. Collectively, these technology-based systems will give NJDOT a wider range of capabilities to manage traffic in Camden and Gloucester counties during project construction and beyond.

NJDOT remains committed to continue to listen to residents, commuters and other stakeholders and keep them informed through newsletters, meetings, postings on the NJDOT project website http://www.state.nj.us/transportation/works/studies/rt295/ and other forms of communication as the project progresses.

The planning process included the creation of an Environmental Impact Statement (EIS) in accordance with federal regulations. A Record of Decision approving the EIS was signed by the Federal Highway Administration on March 20, 2009.

The project includes a total of 10 new bridges, one bridge widening, one bridge rehabilitation and two temporary bridge structures. A total of 22 retaining walls, more than 40 new sign structures and a total of more than 15,000 feet of new or reconstructed noise walls will be built as a part of the project.

The interchange continues to operate as a major artery for Philadelphia commuter traffic and as a connection to the Jersey Shore via Route 42, which connects to the Atlantic City Expressway. I-295 also serves as a major alternative to the nearby New Jersey Turnpike and carries traffic to many New Jersey destinations north and south of the interchange.

The need for significant improvements to this interchange was recognized in 1985 during NJDOT’s design of widening improvements for Route 42. In 1999, NJDOT in conjunction with the Delaware Valley Regional Planning Commission recommended that a project providing for a full, grade-separated interchange be advanced.
Posted by Dan Cirucci at 10:00 AM