All Together Now: 'Don't Cry For Me, Old Dominion!' 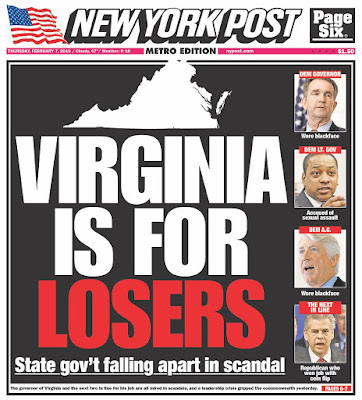 Have you been following what's happening in Virginia?
It's hard to ignore it.
The state's three top officials -- the governor, the lieutenant governor and the attorney general are all embroiled in scandals involving race and sex. And they're all Democrats
It ain't a pretty sight.
Of course, the Democrats are being hoisted by their own petard. They created these sorts of divisive, defining issues. They're the ones who concocted the twisted culture and the rules that now effectively indict this dastardly trio.
Yes, the tables have turned. And, it seems the so-called "champions" of the rights of the abused and the discriminated against are now being put in the unenviable position of running away from their own imperiously righteous pronouncements and judgements.
In short, they want to quietly closet themselves until they can resume relentlessly pointing fingers away from their own tribe and toward other unsuspecting souls.
Yes, they've been boomeranged -- Big Time!
And they deserve the same sort of unforgiving dismissal that they have so often reigned down on others.
But don't be surprised if they survive -- if all three of them get away with it.
Because their fellow liberals in academia and the media and the popular culture all apply a universal double-standard in such matters. When conservatives are caught in such webs the rule is cinch the net and throw them overboard. And wimpy Republicans aid in this sort of modern-day mob rule. But when liberals come up against the same accusations they are subjected to little more than a tsk, tsk and a slap on the wrist. Yes, many Democrats have asked Governor Northam to resign but they're sort of letting all that slide right now. Turns out it was so much lip service. Especially since three of their fellow Dems are now caught up in scandals and the party cannot sustain such a big loss. So, the Dems are in a sort of self-protective mode.
But, back to Virginia itself.
The state was once quite conservative. Indeed, you could have labeled it solidly red.
But Virginia went purple and is now arguably blue -- reliably blue!
You can thank Big Government for that. As Dems and traditional country club Republicans (who are often all too happy to aid Dems) fueled larger and larger government and created a DC behemoth that broke beltway barriers, populous Northern Virginia (NOVA) became a liberal bastion.
NOVA is the land of government workers -- vested, often unionized lifers who vote solidly Democrat.  In many ways it's no different than New York, New Jersey and Connecticut. It certainly seems every bit as crowded. These people in NOVA comprise a vast interest group -- a group that has changed the political landscape of Virginia. What's more, Democrats have been very good at capitalizing on all this.
Still this was no easy feat.
How did the Democrats pull it off?
They did it in two ways.
Of course, they race-baited and guilt-tripped vulnerable voters while subtley rooting identity politics. They invented that game.
But they also found slick, monied candidates like Terry McAuliffe to snooker vulnerable voters. After all Terry was trained by Bubba and the Queen of Deceive herself, Hillary.
And the Democrats also built a big Trojan horse in the form of mainstream type candidates who talked and sometimes acted like moderates. This is what they did with Northam. Then, soon after these candidates are elected, they begin enacting the radical liberal manifesto that the Democrats had in mind all the time. And Northam gladly did their bidding with the ninth-month abortion bill, something that would have been unthinkable in Virginia only a year ago.
Too bad for the Dems when Northam went off the rails trying to explain the legislation and stumbled into a description of choosing to kill an infant already outside the womb. That wasn't part of the script. Liberals didn't want you to know about that.
And then the whole blackface imbroglio emerged -- followed by the second-in-command sex scandal and yet another blackface incident connected to the state's chief law enforcement officer.
But don't feel sorry for Virginia -- not even for one second.
The voters there are getting exactly what they deserve.
And the state is not just a laughing stock but, justifiably, a national embarrassment.
Choose then to celebrate the Big Plus here: lame, louche, looney liberals have finally been exposed as the bastards they really are.
Touché!
Posted by Dan Cirucci at 12:51 PM