A Rare Local Appearance By A Jazz Great . . . 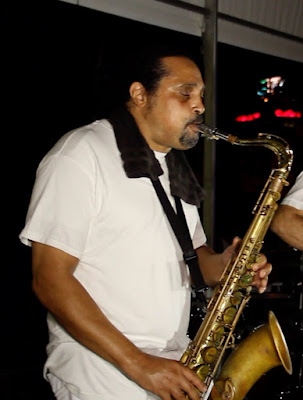 Cape May Jazz Vespers Concert featuring a rare local appearance of the Ron Bass Trio will be held at at the First Presbyterian Church of Cape May on March 3rd at 3 pm.

Ron Bass is a man of many talents.   He’s a great musician, artist and businessman.  He’s a performer, an educator, an entertainer and an entrepreneur.   He throws himself into each of these areas with such passion that it is no wonder he has accomplished so much.  On March 3rdwe are going to focus on Ron Bass the musician and enjoy his mastery of the sax.

Ron Bass saxophonist was born in the Bronx NY and has been playing soprano and tenor sax since the age of 18.  Although not from a musical family, Ron was bitten by the the music bug early began playing with all kinds of bands to gain experience and pay the rent.   His gigs introduced him to Italian styles, polka, Caribbean, Motown, and of course jazz.

He gravitated to the sax early on and was particularly influenced by Coleman Hawkins.   Ron says, “There are only two schools of sax, Lester Young and Coleman Hawkins.  You have to come out of one or the other.  I like the sounds of Coleman Hawkins.”
These days Ron is a highly sought-after saxophonist who plays throughout the tri-state area.   He has played with many of the music industry’s greats.  Ron plays in many different settings, from jazz trios to dance bands, and from concerts to weddings.  Somehow in his busy schedule, he finds time to play in senior communities. “I’ve been doing that for many years.  I enjoy bringing music to people who can’t really get out much.”
Ron is also trying to get a new music-related business off the ground.  He calls it “The Magic of Music and the Arts.”  It is located in Clemonton, NJ  and will be offering workshops and jam sessions for local children. “Today a lot of schools are cutting out their music program,” Bass observes.  “I’m trying to find ways to make up for that.”
For his Jazz Vespers concert, he is bringing The Ron Bass Trio which consist of Ron on saxes, Rich Budesa on keys and Tim Hutson on drums. Rich, on keys and vocals, has played with such local greats as Bootsie Barnes, Papa John DeFrancesco, Duane Eubanks, Christian McBride, Lenny White, Grover Washington, Jr and George Duke.  Tim, on drums has performed and recorded with numerous stars including John Legend, Gato Barbieri, Gerald Veasley and Regina Belle.
With all this talent and experience in so many different musical styles, Ron’s show promises to be a highly memorable concert.   We look forward to welcoming the Ron Bass Trio to the Vespers stage for the very first time.
Posted by Dan Cirucci at 11:29 AM