These Words Seem To Have More Meaning NOW!

"It has been said that anyone who seeks success or greatness should first forget about both and seek only truth, the rest will follow." RR - 1981 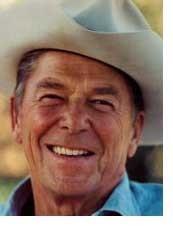 "You cannot pour billions of dollars into make-work while destroying the economy that supports them and call that opportunity. And you cannot build up years of dependence on government are dare call that hope." RR - 1984 "You and I are told we much choose between left or right, but I suggest there is no such thing as left or right. There is only an up or down." RR - 1964
"The Founding Fathers knew a government can't control the economy without controlling people." RR - 1964

"Public servants say, always with the best of intentions, 'What greater service we could render if only we had a little more money and a little more power.' But the truth is that outside of its legitimate function, government does nothing as well or as economically as the private sector." RR - 1964

"Every dictator who ever lived has justified the enslavement of his people on the theory of what was good for the majority." RR - 1974

"Our confidence flows not from our skill at maneuvering through political mazes, not from our ability to make the right deal at the right time, nor from any idea of playing one interest group off against the other. Unlike our opponents, who find their glee in momentary political leverage, we nourish our strength of purpose from a commitment to ideals that we deeply believe are not only right, but that work." RR - 1987

"We need only to believe in ourselves and give men and women of faith, courage, and vision the freedom to build it. Let them call you greedy for not wanting government to take more and more of your earnings. Let them defend their tombstone society of wage and price guidelines, mandatory quotas, tax increases, planned shortages, and shared sacrifices." RR- 1984