Do You See THIS America? Everywhere, It's Real!

The Big Liberal Cabal that dominates our college campuses, holds a head lock on the media and controls the popular culture wants you to believe that Americans are at one another's throats and that those who turn their backs on our nation, its heritage and its values are not only eminently justified but are the vanguard of some kind of new enlightenment.
They want you to believe that love of country is a cheap gimmick; that patriotism is a contrivance and that America is drifting toward dissolution run an age of near anarchy.
"These are dark, dark times," they say. And they say it again and again because that's what they want you to believe.
But if you're paying any attention at all, you know better.
And you probably see the America that we see: a nation where people work together -- a place where, day after day ordinary people routinely open doors for one another, both literally and figuratively. This is a country where, overwhelmingly, people respect one another, help one another and are proud to call themselves Americans. And this pretty much stretches through every strata of society, through all social and economic classes and through all racial and ethnic groups.
To the extent that they exist at all the places where this is now the case are aberrant and are not representative of the whole.
Yes, we know that we are a big, diverse, complicated country and we know that we have our share of problems. We're not perfect -- not by any means.
But we also know that we are one people, one nation under God with liberty and justice for all.
That's what we see in the video above. That's what these boys understand. And that's why we're drawn to them -- because this is what we all understand and love!
God bless America! 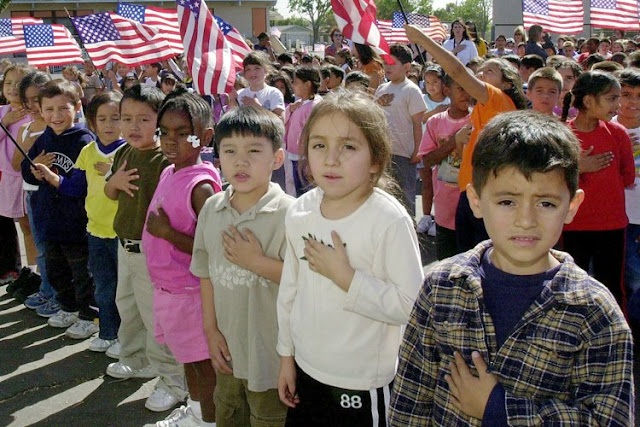