Get This Straight: New Jersey Is NOT For Sale! 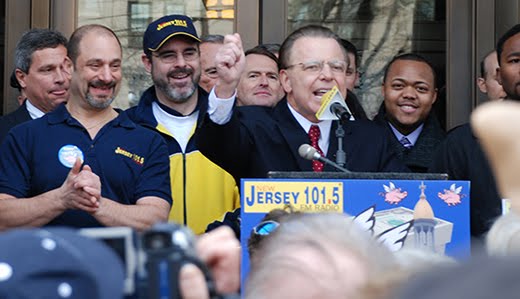 Sen. Joe Pennacchio speaking at a State House rally in Trenton on Feb. 8, 2008 in opposition to Gov. Jon Corzine’s privatization plan that would raise tolls by more than 800 percent. (SenateNJ.com)
“New Jersey is not for sale. There is a better way,” Senator Pennacchio said. “We don’t have to resort to gimmicks that failed under Corzine. Someone should remind Governor Murphy that his Democratic predecessor’s proposed 800-percent toll hike caused a public outcry unlike anything we had seen in years. It was widely criticized by legislators on both sides of the aisle, and for good reason.

“New Jersey has the highest property taxes, the nastiest business climate, and one of the worst public pension debts in the country. Unless we get spending under control now, this state will continue to free-fall without a parachute towards a full economic collapse,” Senator Pennacchio added. “Instead of having a fire sale of our assets, let’s look at responsible ways to solve our fiscal crisis. Racinos in Yonkers have sent back more than $1.5 billion to New York State. New Jersey should be next.”

State Treasurer Elizabeth Muoio has proposed increasing tolls and selling off state assets, such as the New Jersey Turnpike. Similar plans by the Corzine administration to increase tolls and to sell the New Jersey turnpike were widely condemned by the public. Senator Pennacchio was part of the opposition efforts to these toll hikes when they were proposed by former Gov. Corzine in 2008.

Pennacchio noted that a judge will usually require asset sales as part of a bankruptcy proceeding. It should not be part of the normal course of doing State business, the Senator said.

As an alternative to selling off state assets, Senator Pennacchio today reiterated his call for bringing racinos to the Garden State.

Senator Pennacchio first introduced this legislation in 2014. Under SCR-27, the revenue would be derived to support State-administered defined benefit retirement systems, casinos, improvements to Atlantic City, and horse racing.

Racinos in Yonkers, New York have proven to extremely successful, funneling $1.5 billion back to New York State between 2006 and 2012.

“Why would the Governor even consider selling off state assets, when there are other solutions on the table? A one-time fire sale is not a long-term solution,” Pennacchio added. “Raising taxes and tolls will only force more businesses and commuters out of the state. Bringing racinos to New Jersey is an innovative way to help fund the state pension.

“We are in the midst of a crisis. Every fiscally-responsible alternative warrants consideration. I urge my Democrat colleagues to join me in this effort by immediately calling for a hearing on my bill to bring racinos to New Jersey."
Posted by Dan Cirucci at 3:08 PM