Drive One, Buy One! 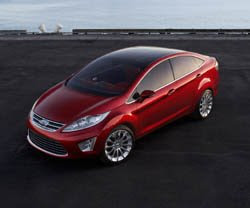 The car that put the world on wheels, the Ford Model T, is celebrating its 100th anniversary in 2008, and Ford is planning a year-long series of celebrations to honor the iconic vehicle. At the same time Ford is producing new vehicles that are setting the pace for value, quality, dependability and downright good looks.
I know because I've driven a Ford product for more than 20 years. And every person in my immediate family also drives a Ford vehicle. I believe in American cars and American products and Ford is the quintessential American company. And now Ford has a new advertising campaign that says it all: Drive One. Like most successful ad campaigns this is simple and direct. But it also makes a key point: Drive it. Try it. Don't knock it if you haven't tried it.
One hundred years ago, the Ford Model T changed the world with its technology and the same concept has lived with Ford ever since.
Ford is committed to keeping pace with changing markets throughout the world. In 2010 Ford will introduce its new Verve (concept car pictured) in North America. This is a small, entry-level car targeted to a group of young people aged 13 to 28 years – dubbed “Millennials.” Today, this group stands 1.7 billion strong worldwide and will represent 28 percent of the total U.S. population by 2010. The Verve is expected to arrive in Europe and Asia later this year.
Posted by Dan Cirucci at 9:10 AM