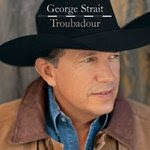 They'll be no April Foolin come Tuesday.
This is the real deal: George Strait hits stores April 1 with his 37th album, Troubadour.
The “King of Country Music,” continues to raise the standard as he follows up his CMA Album of the Year, It Just Comes Natural. This new album’s first single, “I Saw God Today,” already set a personal mark when it debuted at No. 19 on the country radio charts—higher than any other song he’s released in his career. Currently it sits at #4 on R&R/Billboard.
“It’s a great record to start it out with,” says Strait. “Anyone who has had a kid can relate to seeing them for the first time and know that it is really and truly is a gift from God.” From a creative vantage point, the album as a whole promises to be remarkable. We're told that Strait explores new musical turf with the calypso R&B in “River Of Love”; opens up to meaningful—and rare—guest appearances by Patty Loveless, Vince Gill and songwriter pal Dean Dillon; and delivers the 12-song set with a voice that continues an extremely graceful evolution.
“He’s always good,” friend and co-producer Tony Brown says, “but he sang really good on this album.”
“His vocal tone has progressed very, very nicely in the last five or six years,” observes Dillon, who should know: He’s written 13 of Strait’s hits, dating back to the first, 1981’s
George Strait has more gold and platinum albums than any other country artist. He joined the Country Music Hall of Fame in 2006, making him the only performer who’s earned a plaque in the hallowed halls while still consistently racking up hits.
“Troubadour…you know it does tell a pretty good story that fits my whole career from start to finish,” admits Strait. “cause that’s really what I’ll be when I grow to an age I can’t do this anymore. I’ve always wanted to be around as long as I could for sure. I’m still after longevity. I want to make records as long as I can cause I still enjoy it just as much as I always did.”
Posted by Dan Cirucci at 5:39 PM