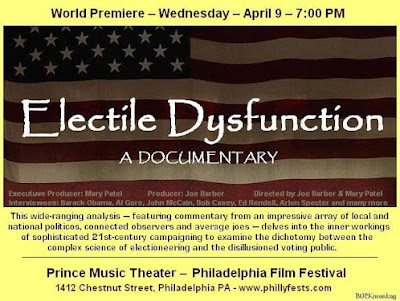 Our friend Mary Patel will premiere her long-awaited (and cleverly titled) documentary Electile Dysfunction next week (Wednesday, April 9) during the Philadelphia Film Festival at the Prince Music Theater at 7 PM.
This film examines the growing "science" of electioneering and stacks it up against the public's disillusionment with the whole process. Mary's wide-ranging analysis and commentary feature an impressive array of local and national politicos. But the film also includes up close and personals with average voters and the local foot shoulders who toil away on behalf of political candidates. Leave it to Mary to cover all the bases and tell a story in-depth but with a shrewd and entertaining eye as well.
Mary Patel's Political Notebook in the City Paper is one of the most widely-read columns of its type in the region and Mary also appears on Inside Story on Philadelphia's 6 ABC-TV.
Order tickets to the premiere of Electile Dysfunction by clicking here.
Posted by Dan Cirucci at 3:48 PM