'Good Time' Had By All 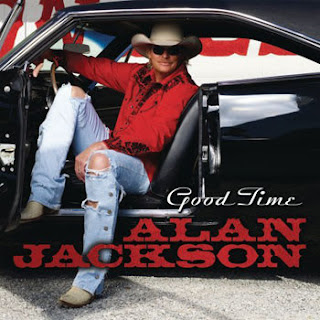 Country great Alan Jackson’s
"Good Time" will debut at #1 on the Billboard 200 and the Billboard Top Country Albums charts this week, with first-week SoundScan sales of 119,151, marking his fourth album to hit the top spots simultaneously on week of release. You’d think that Jackson was a closet numerologist since God Time is his 17th album and contains 17 songs, all written by Jackson (a first) over the course of 71 satisfying minutes. The first single from the album, “Small Town Southern Man,” is Jackson’s 51st single, and has been steadily climbing the charts – it’s #2 this week.
Is anybody really surprised that Alan Jackson continues to top country and pop charts with his laid-back sweet southern way with a song? Jackson makes it all seem effortless. And yet, to maintain a place as part of country music royalty year-after-year is no mean feat. And in addition to writing may of his own songs The Big Guy from Newnan, Georgia continues to tour month after month playing to packed houses wherever he goes.
USA Today has called Alan Jackson "one of country music’s true masters, the kind who can make life’s most mundane circumstances carry emotional heft and make it look easy.”
Keep on keepin on, Alan. You make country music resonate with the heart and soul, the hopes, dreams and wishes of the everyday folk who make America great!
Posted by Dan Cirucci at 6:29 PM