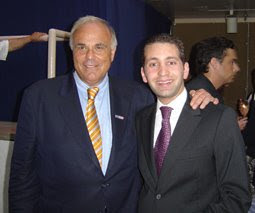 Our friend Scott Sigman (shown here with Pennsylvania Governor Ed Rendell) is the new Chair of the Philadelphia Bar Association's Young Lawyers Division (YLD).
We're showcasing Scott today because he is one of the most dynamic, determined and energetic people we know.
Before joining the Philadelphia law firm of Bochetto & Lentz Scott was an Assistant District Attorney with the Philadelphia District Attorney's Office under the great Lynne Abraham. In the DA's Office he was assigned to the Narcotics Division, first as a Law Intern and then as a Prosecutor. Scott was specially assigned to criminally prosecute Philadelphia’s most serious drug offenders from pre-arrest to post-conviction, litigate the forfeiture of the offender’s real estate through a quasi-civil forfeiture hearing, and litigate civil actions against some of Philadelphia’s worst nuisance bars. He was also the Weed & Seed Prosecutor for North Philadelphia. Scott prosecuted Pennsylvania’s very first Weapons of Mass Destruction case. During his tenure as an Assistant District Attorney he tried hundreds of cases in the Philadelphia Court of Common Pleas.
At Bochetto & Lentz Scott concentrates his practice in the areas of complex commercial litigation, catastrophic injuries, election law, defamation, fraud, Civil RICO, and white-collar criminal defense. He has been selected as a "Pennsylvania Rising Star Super Lawyer" by Philadelphia Magazine in 2005, 2006 & 2007 and as a “2006 Lawyer on the Fast Track” by The Legal Intelligencer.
Sometimes it seems as if Scott is literally everywhere. Scott Sigman works tirelessly for any cause he becomes involved in and the Philadelphia Bar Association and many other groups benefit from his talents and boundless energy. He's the kind of person who gives us great faith in the future.
Posted by Dan Cirucci at 9:14 AM