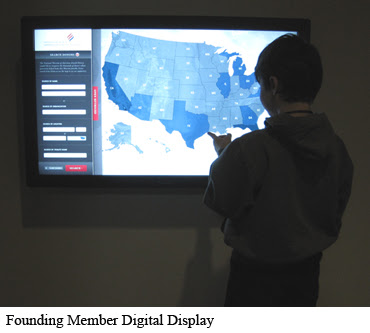 While the new National Museum of American Jewish History  (NMAJH) in Philadelphia has now officially been open for two months, the opportunity to become a Founding Member is still available.Founding Memberships may be purchased for you or others with a gift of $54.
Founding Members who make a gift of $180 or more will receive the two-DVD set of "The Jewish Americans," the PBS documentary from Emmy-winning director David Grubin, who made a number of new films for the Museum's core exhibition.
Founding Members will also have unlimited opportunities to visit NMAJH throughout the 12-month membership term. The names of all Founding Members are also permanently listed in an interactive database in the Museum.
For information on the Museum's fundraising activities, including named-gift opportunities, contact Irv Hurwitz, the Museum's director of institutional advancement, at 215.923.3811 x 133 or via email at ihurwitz@nmajh.or
To sign up as a Founding Member today, visit www.nmajh.org/join.