"I for one would like to welcome our new computer overlords..." 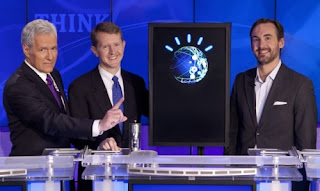 These are the words of Jeopardy! champion Ken Jennings as the competition with Watson, the IBM supercomputer came to an end.

Watson beat out Jennings and fellow game show champ Brad Rutter in a three day competition. The computer earned $41,413 in the contest, earning $1 million for an IBM charity.

Each day, Watson's performance was more and more impressive. Jennings and Rutter put up quite a fight, but the computer was too fast and too accurate.

Watson isn't just for game shows. The applications for this kind of technology is more widespread.

IBM - Smarter Answers for a Smarter Planet
Posted by Frank Edwards at 7:46 PM