Truth, Justice and the American Way... Not Anymore! 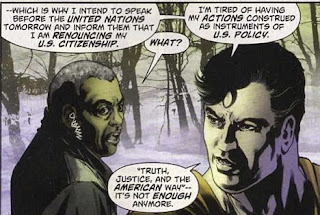 DC Comics has announced a shocker: Superman is renouncing his American citizenship. The personification of Truth, Justice and the American Way is no more.

In Action Comics #900, the Man of Steel is concerned that his actions are being "construed as instruments of U.S. policy." In his own words, Truth, Justice and the American Way aren't enough any more.

As a comic book buff, I'm well aware of Superman's origins. Creators Jerry Siegel and Joe Shuster, children of Jewish immigrants, made their strange visitor from the Planet Krypton a force for social justice and fighter of tyranny. For well over 70 years, Superman has been synonymous with the core American beliefs and patriotism, so much so that one of his nicknames is "The Big Blue Boy Scout."

DC Comics claims that this is a reflection of Superman's desire to have a more global impact. But he did that before. Why fix what isn't broken? Superman, Batman, Wonder Woman, Flash and Green Lantern are all DC creations and all are heroes of mythic proportions. They're representative of the best of the best. They are true icons, worthy of their place on Mt. Olympus.

So why not keep that in mind for Supes? Regardless of the crappy things going on in our country: massive debt, unemployment of epic proportions and poor choices all around, can't Superman stay true to his ideals? Can't he represent the best America has to offer?

Guess it's more popular to take a not-so-subtle dig at the American Way. Maybe we should turn on the Bat Signal to get everyone's favorite nocturnal detective to find out the real agenda behind this ridiculous change.
Posted by Frank Edwards at 10:48 PM