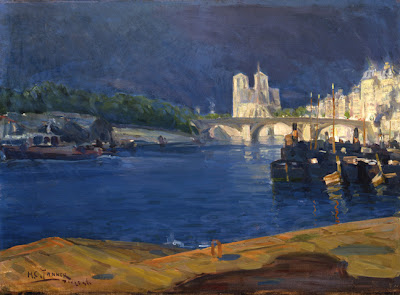 We enjoyed a beautiful Sunday afternoon at the Pennsylvania Academy of the Fine Arts in Philadelphia where we soaked up the richness of a major retrospective featuring the works of Henry O. Tanner.

This new exhibit (which begins in Philly and will later travel to Cincinnati and then to Houston) covers the career and life of Tanner (1859-1937) - including the pioneering African-American artist’s upbringing in Philadelphia in the years after the Civil War; the artist’s success as an American expatriate artist at the highest levels of the international art world at the turn of the 20th century; Tanner’s role as a leader of an artist’s colony in rural France and his unique contributions in aid of American servicemen to the Red Cross efforts in WWI France; his modernist invigoration of religious painting deeply rooted in his own faith; Tanner’s depictions of the Holy Land and North Africa interpreted through comparison with contemporary French orientalist painting and photography; and the scientific and technical innovations of the artist’s oeuvre.
You will be inspired by Tanner's art and deeply impressed with the human and psychological depth that he brings to every work. His colors, nuances, reinterpretations of classic themes and impressionist influences will beguile you.
Henry O. Tanner was a student at the Pennsylvania Academy of the Fine Arts from 1879 to 1885. PAFA is now proud to organize this exhibition, and especially to elevate Tanner’s reputation through new scholarship and to bring his greatest works together for the first time in a generation.
What a joy it is to have this major exhibition kick off its tour in Philadelphia.
Henry Ossawa Tanner: Modern Spirit runs through April 15. It then goes to the Cincinatti Art Museum from May 26 through September 9 and then to the Houston Museum of Fine Arts from  October 21 through January 13. Don't miss this!
Posted by Dan Cirucci at 5:12 PM