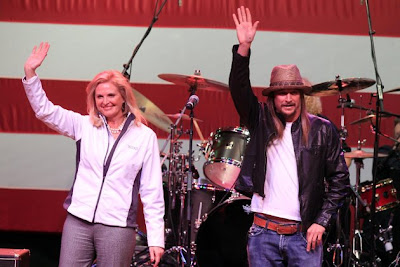 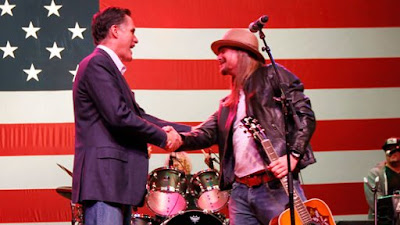 Mitt Romney's been using Kid Rock's Born Free as his official campaign song.
But for his big rally in Michigan last night he wanted Detroit's own Kid Rock to come and sing the song live.
Kid Rock is a salt-of-the-earth kinda guy. He's not only an exceptional talent but he's real. What you see is what you get. Rock (who's real name is Bob Ritchie) is someone who never forgets his roots. He's a very pro-America kinda guy: a strong supporter of our troops; a big-time booster of his home city and state and someone who's not shy about giving back to the community.
So before he agreed to perform at the Romney event Kid Rock wanted to meet and chat with the candidate.
Fair enough. Romney and Rock met for more than an hour. They discussed a variety of topics and each man presumably liked what he heard.
Last night Kid Rock officially joined the Romney team live, appearing with Mitt and Ann Romney to perform his song.

Here's how Romney explains it:
"He said, 'If you're elected president, will you help me help the city of Detroit?' I said I would. And then I turned to him, and I said, 'By the way, given the fact that I'm willing to do those things, will you come here and perform a concert tonight for my friends, and he said he would," said Romney. "So I'm happy to introduce a son of Detroit, a friend, a guy who makes great music, who introduces me by DVD everywhere I go - Kid Rock!"
As Kid Rock belted out the lyrics to "Born Free," Romney and his wife Ann stood and listened, tapping their feet, clapping and whistling in support.
Kid Rock is a giant musical talent whose music runs the gamut from rock to blues to country. He's a modern American success story who also has common sense and isn't afraid to defy the conventional wisdom that entertainers must all be part of the air-kissing liberal set.
Bravo!
Posted by Dan Cirucci at 9:56 AM

So celebrities that support the left are bad, should keep quiet and so on, while when one sides with a GOP-er, that's to be celebrated, is that correct?

I think the gist of Mr. Cirucci's post was: "good for Kid Rock to stand up against the grain within his profession and stand for something real."

While most entertainer's jump to be on the bandwagon of hope and change because it's the "cool" thing to do, Kid Rock met with Romney and talked issues. He then made a decision based on that meeting. That's called thinking for yourself and it's something we need to teach America more of.