Obama: Recovery Still 'A Year Or Two' Away 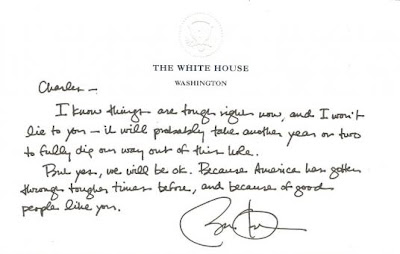 There it is, in black and white and in President Barack Obama's own hand.
Obama effectively admits our economic recovery just simply hasn't arrived yet.
In fact, "it will probably take another year or two to fully dig our way out of this hole."
That's what the president says in answer to an unemployed Maine carpenter who wrote to him in June asking: "Are we as Americans going to be alright?'
What is clear is this: The president is trying to set the carpenter (and all of us) up for the fact that the promised recovery not only hasn't happened but it won't be happening anytime soon. In fact, it's still years away, if not longer. Obama's policies have failed. And Obama's playing for time.
But the carpenter isn't buying the excuses or the plea for more time. Here's what the carpenter says: “He’s out campaigning saying everything is coming up roses. He’s a lying SOB.”
Click here to read more.
Posted by Dan Cirucci at 2:26 PM