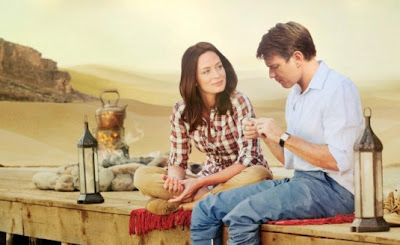 Can a movie entitled Salmon Fishing In The Yemen become a hit?
Well, it does have a stellar cast: Ewan McGregor, Kristin Scott Thomas, Emily Blunt and Rachel Stirling.
And it deals with very hip, up-to-the-minute topics: turmoil in the middle east, terrorism, the fast pace of global events and the demise of the world's superpowers (sort of),
Then there's wry British humor and commentary -- not to mention lush scenery.
This is the tale of a visionary sheik who wants to bring salmon fishing to the Yemen because he feels it will enrich the lives of his people. Plus, he really believes in the idea of actually creating a waterway in the dessert -- a waterway suitable for fly fishing for salmon.
It would seem to be a totally ridiculous idea.
But in the hands of  a smart, gorgeous financial consultant; a deceivingly shy, contemplative scientist (who also happens to be an avid angler) and a far-from-subtle public relations guru and self-styled superwoman the idea takes hold. And faster that you can say "I got one" the British government is all-in on the scheme.
This film combines sport, romance, philosophy, politics, international trade, religion, culture clashes and image-making into a tale that asks the question: "If salmon can swim upstream in the desert, can we defy the odds in our own lives and find greater meaning, love and (dare we suggest) happiness?"
The answer lies somewhere between the angst of daily life (our humdrum existence) and the eternal romantic triangle (the breathless pursuit and the thrill of the catch). The romance is played out via the characters portrayed by McGregor, Blunt and newcomer Tom Mison. Scott Thomas plays the bully/promoter and Waleed Akhtar plays the philosopher/shiek with each of them taking an opposing side in the love triangle.
Though this movie is not a costume drama, it does have a veddy "Masterpiece Theatre" quality about it. And McGregor's character is so tightly wound that sometimes you just wanna slap him -- or at least borrow those immortal words from Cher in Moonstruck and yell: "Snap out of it!" Indeed, for the most part the British men in this film are so relentlessly spineless (and the women so persistently aggressive) that the humor can wear off rather quickly.
And the scenario becomes less believable as the conclusion draws near.
But this is an unusual movie that dares us to soar. It wants us to get out of our comfort zones --  to feel alive again in a rush to recapture dreams and aspirations that we may have left behind.
That's the rush that comes from taking risks and aspiring to something greater.
If you're ready for that kind of rush (cool water, high hopes and the Big One then doesn't get away, after all) then Salmon Fishing In The Yemen just may be for you.
Posted by Dan Cirucci at 5:18 PM