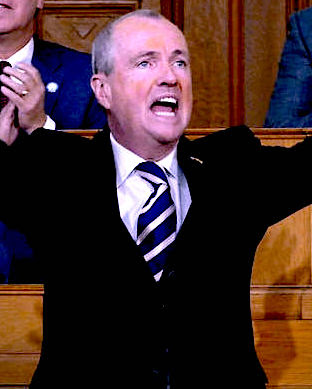 So now New Jersey Governor Phil Murphy is all hot 'n bothered about tax breaks granted by the state to various companies to keep them in New Jersey or attract them to New Jersey so they can boost the economy and create and/or save jobs.
Ya see, the governor needs something -- anything -- to distract from growing scandals surrounding his one-year-old administration.
So, he's settled on a war against a program designed to provide tax incentives to the tune of up to $11 billion since 2005 -- that's 14 years, in case you're counting and that includes both Democrat and Republican administrations.
It's important to note that only a fraction of the $11 billion earmarked for this program has actually been distributed this far. And, the program has reportedly generated $34 billion in capital investment in the state and saved or created nearly a quarter million jobs.
But Murphy (who made his zillions via Big Time corporate investments and other money exchanges) now seems to be at war with business. So, that facts will not stand in his way as ht plays the progressive blame game,
But, don't take our word for it.
No, instead listen what a top local DEMOCRAT has to say about the words of his party's standard-bearer yesterday:

“Disappointingly, I watched the Governor address the legislature wasting time and energy to relitigate the same subject matter he brought up last week. Unfortunately, these critical comments ring hollow compared with his actions by trying to give away billions of dollars in incentives to some of the richest people in the world. Since he has taken office the Governor has employed this same tax incentive program to the tune of more than $5 billion to entice Jeff Bezos, the richest man on the planet, to move a part of the Amazon corporation to Newark and another undisclosed $200 million award the Murphy administration approved to a wealthy international pharmaceutical company, AmerisourceBergen less than a year ago. His actions and his words do not seem to be following the same pattern and his ad lib anger seems to be more theater than real scorn.

The EDA has been working on these incentives statewide since 1996 and the Governor continues to paint all incentive recipients with a broad, righteous brush. Instead of trying to demonize all of the companies who have worked to be part of a once in a lifetime transformation in Camden, the city should have been celebrated like our counterparts in North Jersey in today’s speech.

In Camden County, we have had a renaissance take place in the city and county that has been nationally recognized by everyone from President Barack Obama to national publications like the New York Times and the Wall Street Journal. Before the Governor decides to paint with such a broad brush I would hope that he identifies corporations that are not following the law the way it was intended.
Measured by every objective metric, Camden is a success story in the making based on the use of the current EDA incentive program. The results are irrefutable and tangible throughout the city and it wasn’t by happenstance that these changes took place.

The New Jersey Economic Opportunity Act of 2013 (“Grow”) has been a catalyst to attract businesses to Camden. The Grow program was a successful attempt to rebuild the city by incentivizing companies to locate their offices here. In the future, we believe enhancements laid out in the Comptroller’s report can make the program more effective and will further provide a boost to our city using more surgical methods. Based on the Comptroller’s analysis and recommendations we believe the findings are the basis to make the EDA incentive system stronger. We agree with the Comptroller’s Office that the incentives have been “critical tools in the state’s effort to retain and attract business enterprises” and we also agree that policies can be enhanced to improve confidence in the operation of the overall program.

Bottom line: We couldn't agree with Freeholder Cappelli more and we thank him for speaking honestly and forthrightly not only on behalf of the county but also on behalf of our beloved hometown of Camden. Bravo!