Nah! We're Not Even Gonna Mention Her Name! 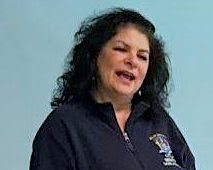 So, a New Jersey State Senator (photo, left) who's been quite successful as a Republican is jumping ship.
She's switching to the GOP where she says she'll be more comfortable.
We can't help but think that the  move is coldly (almost clinically) calculated.
And we suspect that the launch of her political career as a Republican many years ago was guided by the same sense of detached expediency. She was a Republican then since the Republicans controlled her county and that's what most of the people around her were.
She's decided to be a Democrat now because the Democrats have gained control of the same county. She's lucky they're welcoming her but apparently those wheels were already well-greased.
So, she's likely cut a cozy deal with her "new" party.
We say "new" because the party she's embracing increasingly peddles one of the oldest shell games imaginable -- aka socialism. But, as far as we can tell, ideology means little to her. So what if she sits with those who endorse wide open borders, abortion on demand (up to and including the ninth month), rampant budget-busting giveaways and runaway income distribution -- just to name a few? So what?
Or, as another calculating Democrat once said: What difference at this point does it make?
Posted by Dan Cirucci at 5:46 PM