What You Never Knew About Carol Channing . . . 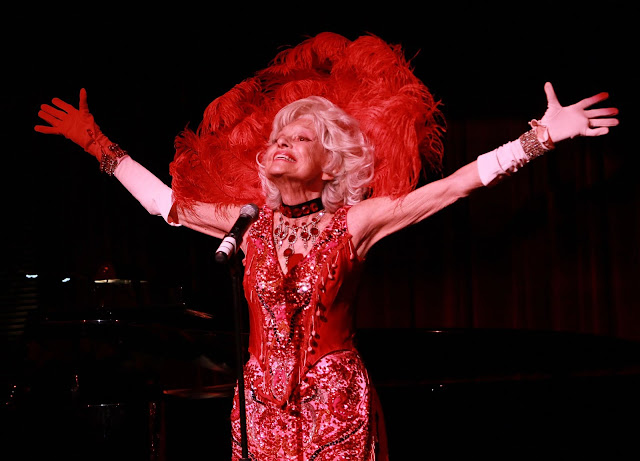 With her wide smile, big eyes and effusive persona Carol Channing (who has passed on at age 97) was always bigger than life. When she stepped onto a stage all eyes seemed to naturally turn to her.
But the smile was painted on and the heavy makeup that she strategically placed along the bridge of her nose made its appear as if she had a turned-up nose when that simply was not the case. And, more often than not she wore a wig.
It was all self-created and highly-theatrical -- so much so that Carol Channing seemed born for the stage. When she held out her arms (as in the photo above) there seemed to be room enough for the entire audience, all the way up to the last row of the balcony in every Broadway house and in countless theaters not just all over the country but all over the world.
Carole Channing was thoroughly American, no question about that.
But Carol Channing was also Jewish and also part African-American. And Channing wasn't her real surname. Her father was multi-racial and his name was George Stucker. For whatever reason, he changed his name to Channing just prior to Carol's birth. And Carol Channing's mother was a German Jew named Adelaide Glaser. Channing was raised as a Christian Scientist but she remained keenly aware of her true multi-cultural and multi-racial heritage, embracing both latter in life in typical Carol Channing fashion.
"Growing up, I was a Jewish theater-lover, but that's redundant," Channing reportedly said. "I mean, Jewish and theater lover are two terms of the same meaning," she added. As for her African-American heritage, in her memoir she counted it among her many blessings. Of this part of her, Channing said: "I know it's true the moment I sing and dance. I'm proud as can be of [my black ancestry]. It's one of the great strains in show business. I'm so grateful."
You might have thought that Carol Channing led a blissfully happy life but such was hardly the case.
She is said to have recalled that she was both frightened and embarrassed by her mother, described as "a woman of wildly varying moods who kept her from having friends and lied to her teachers about her."
As she moved into adulthood. working to make a name as an actress was not easy and she was hardly an ingenue. A theater veteran remembered her at this point as "awkward and odd-looking." In fact, she didn't hit it big until she was almost 30 when she landed her breakout role in Gentlemen Prefer Blondes. That's when she sang the song Diamonds Are A Girl's Best Friend and became known as a top-notch comedienne.
Was she a great singer? Well, no -- not with that voice. Was she a world-class actress? Actually, no. It's not like she was classically trained or schooled in The Method or anything like that. More often than not she played the role of Carol Channing. Was she a great dancer? No, but she could do a soft shoe and knew how to move on stage -- knew how to wring the last drop out of every scene and sigh and coax the spotlight her way. In short, Carol Channing had that undefinable it -- that certain stage presence, that magic that captivated audiences from the moment she hit the boards.
And it's easy to see why she was more at home on stage than off, as her personal life was hardly a dream.
Her first husband, Theodore Naidish, was a writer; her second, Alexander Carson, was center for the Ottawa Rough Riders Canadian football team. They had one son, Channing Lowe (an editorial cartoonist for the South Florida Sun-Sentinel) who later became estranged from his mother. In 1956 Carol Channing married her manager and publicist Charles Lowe. But Lowe was a closeted gay man and while they remained married for 42 years, when she filed for divorce in 1998 she alleged they had marital relations only twice in that timespan. Lowe died before the divorce was finalized. In 2003, Channing married Harry Kullijian, her high school sweetheart, who reunited with her after she mentioned him fondly in her memoir.

And, one final thing: The role of Dolly in Hello, Dolly! (Channing's greatest triumph) was not written for Carol Channing and the songs were not created with her in mind. No, Jerry Herman and Michael Stewart adapted the show from Thornton Wilder's The Matchmaker and created the stage role precisely for Ethel Merman, the reigning Queen of Broadway at that time. But as much as Herman and producer David Merrick begged Merman to do they show (over and over again) Merman refused. That's how the role fell to Channing and the rest, as they say, is Broadway history.
Carol Channing pretty much Performed Hello, Dolly! for the rest of her life. In fact, she played it more than 5,000 times all over the world and in all that time was known to have missed only one performance  -- an unprecedented record that would be the envy of any star today.
Carol Channing's name was always in lights. But Channing herself -- her wide grin; her big, batting eyelashes; her outrageous moves, flamboyant costumes and distinctive gravely voice -- she was the brightest light of all. And that light lent the Great White Way a glow that epitomized Broadway's Golden Age!

The great ones never missed shows. Channing and the late and lamented Marian Seldes lead that list.