The Man Who [Literally] Put Cherry Hill On The Map 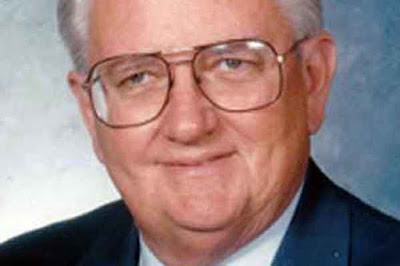 This is the story of how a gentle, bespectacled, uncharacteristically unassuming public servant made a world of difference for his hometown.

After Delaware Township (NJ) changed its name to Cherry Hill in 1961, a sort of magic came over the town and it entered an unprecedented growth spirt that continued well into the 1980s.
Part of the transformation involved Cherry Hill getting its own post office. Before that, there was no Cherry Hill address. Instead, if you lived in Cherry Hill your mail was usually addressed to the nearest community or neighborhood, such as Haddonfield or Merchantville or Ashland or Erlton.
But the new Cherry Hill address was still not enough to put Cherry Hill, literally, on the map. Nor was it enough to change roadside directional signs.
So, if you looked at a map (and there was no digital mapping in those days, only paper maps) you saw Haddonfield and Camden and Merchantville and other older, more established towns but no Cherry Hill. Some more detailed maps showed older sections of Cherry Hill such as Ellisburg and Ashland but no Cherry Hill. And state highway signs directed you to these same locations but not to Cherry Hill.
It was almost as if there was a Cherry Hill Inn and a Cherry Hill Mall (and everybody knew about those attractions) but no real Cherry Hill.
As Cherry Hill grew and began to be built out from Pennsauken to Vorhees and from Camden to Evesham this became more and more of a problem. Yes, it helped that eventually there was a big water tower with the words “Cherry Hill” emblazoned on it that you could see from interstate 295 or the New Jersey Turnpike, but there was no exit that said “Cherry Hill” — only exits that directed you to places like Camden or Collingswood or Philadelphia.
In fact, in the 1970s, it was not uncommon for motorists to stop at a gas station for directions to Cherry Hill (remember, there were no travel apps) only to be told that they were already in Cherry Hill or, conversely that they had overshot Cherry Hill by five or ten miles.
The situation was nothing short of exasperating.
So, in response to numerous complaints, then Cherry Hill Mayor John T. Holden set out to do something about the situation. He was warned this would not be easy. But Holden was a very determined man.
Still, the more he tried to identify the source of Cherry Hill’s geographic anonymity, the harder it became to pinpoint the culprit. The post office, the New Jersey Department of Transportation, mapmakers, the US Census Bureau — all of these departments and agencies pointed the finger at one another. Nobody seemed to want to take responsibility for the conundrum.
Finally, Holden called an unprecedented summit on Cherry Hill’s lack of official recognition. And, he invited representatives from all of these agencies and well as local, county, state and federal elected officials. In addition, he opened the whole thing to the public and the news media to highlight the problem.
At this unprecedented open forum, they thrashed it all out and it soon became apparent that the crux of the problem seemed to be that townships weren’t recognized geographically in the same manner as towns, boroughs and cities. Though they were official government entities, townships were viewed as mere collections of subdivisions and little more. In short, they were not deemed map-worthy.
Well, this revelation not only distressed Cherry Hill but it threw every other township in New Jersey into a state of apoplexy.
What? Townships were not places? Since when?!
If there’s one thing that politicians and government agencies understand it’s that there’s strength in numbers. And, all of a sudden Cherry Hill had lots of allies all over the state.
Suddenly, the logjam was broken. because it wasn’t just about Cherry Hill anymore but now it was about Evesham and Pennsauken and Mount Laurel and Hamilton and Washington and Woolwich and all 241 townships all over the state.
Of course, government policies and practices never change easily or quickly but things really did begin to change. And, over time, Cherry Hill began appearing on road maps and on road signs. Where official state directional signs once said “Camden Philadelphia” they now said “Cherry Hill Camden Philadelphia.” Where they once said “Haddonfield Collingswood” they now said “Cherry Hill Haddonfield Collingswood.” Where they once said Erlton or Ashland they now simply said Cherry Hill.
The change was dramatic, impactful, even stunning.
And it all happened because of one man: John T. Holden.
He’s the guy who literally put Cherry Hill on the map!

Thank you Dan, I wish that in todays world, politicians could still come together to solve problems. Thank you for recognizing my fathers work. John Holden Jr.