Charisma: How It Died And Why We Still Miss It

The word itself is magic.It sort of rolls off the tongue like "abracadabra" or "Allakhazam."

But you don't hear much about it anymore. Who's charismatic right now? The answer is a stumper.
Many regard President Trump as compelling, quixotic, maybe even entertaining. And yes, he's built a vast movement with an immensely lower fan base. But you'd hardly call him charismatic, for reasons which we will explain. And Joe Biden? Linking his name with charisma would be like pairing lethargy with frivolity.
The two just don't go together.
Is there anyone in the popular culture (anyone in the world of sports or entertainment) who could be considered charismatic?  Again, we're drawing a blank. Maybe it's because the Greek origins of the word charisma conjure up various meanings, including favor, divine gift, yearning and even grace, beauty and rejoicing. Grace seems to be in exceptionally short supply these days. As for a divine gift, we can identify no present-day saints. 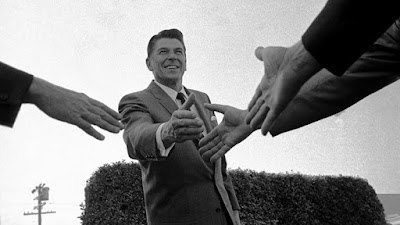 Let's examine all this a bit more.

What is it that makes a person charismatic? We say we know it when we see it - or when we've seen it, since charisma can be fleeting. So much of it is "of the moment."

Charisma is expressed in the way Winston Churchill held two fingers aloft as a "V" for victory during World War II. It was there when Franklin Roosevelt cocked his head and jauntily held his cigarette in a holder between his teeth. We hear charisma in the rich thunder of Dr. Martin Luther King Jr.'s voice and we see it in Gandhi's eyes behind those delicate round spectacles.

When Ronald Reagan threw back his shoulders and walked to the podium or paused at just the right moment for a punch line - or grew serious and declared: "Mr. Gorbachev, tear down this wall!" - that was charisma.

There's little doubt that John F. Kennedy had charisma. I witnessed the Kennedy magic in person during the 1960 presidential campaign. When I met him, I knew there was something different. He didn't seem full of himself like so many public figures. In fact, he seemed shy and somewhat detached in the public spotlight. At the same time, however, he had a certain grace and bearing.

He'd lower his shoulders a bit and thrust his hands into the pockets of his suit jacket. He'd look away for a moment and appeared lost, almost to the point where you wanted to help him.

But then he'd look at you and start to speak. The eyes, the hair, that smile, those teeth, the voice with its distinctive accent - in no time at all you found yourself cheering for him. This was a man, to use another Greek word, who seemed to be completely without hubris. And, in his case, the subtlety of the seduction proved irresistable.

Of course, we now know that JFK was a thoughtful, somewhat conflicted person with a first-rate mind and good political instincts. But he was also a fatalist who was capable of incredibly reckless behavior in his personal life. Part of his charm came from the fact that he really did not seek center stage. His public role was thrust upon him, imposed upon him.

People claimed they never really knew JFK. The same has been said countless times about Reagan and FDR. They've all been called enigmatic. Elusiveness lies at the core of charisma. Without some mystery, it withers. Sadly, today we all know way too much about our public figures.

Still, charisma, when it comes along, remains catnip to the masses. We want the "stuff" of charismatic people. But, on some level, truly charismatic personalities understand that this is precisely what we must not have. So they hold back.

And they make it a point not to talk about themselves too much and not to exhibit undue self-consciousness.
There are fewer and fewer like this on the public stage. That's part of the reason why charisma remains an extremely rare commodity.
Also, things move too fast now and tastes change too quickly. Charisma is more penetrating than mere cultism, more enduring than infatuation. It doesn't have time to take hold anymore. Our endless curiosity and the white-hot glare of the mega-media age singe the lining of charisma's cloak. And our public figures are simply too full of themselves - too showy, too windy, too loud, too long, too obvious.

Josephine Baker, the legendary cabaret star of another era, expressed it best when, near the twilight of her glittery career, she exhorted her adoring fans: "Darlings, don't come too close, you'll spoil the illusion!"
Posted by Dan Cirucci at 9:05 AM